FASHION: M&S and the search for the killer coat

Marc Bolland recently stepped down as chief executive of Marks & Spencer, mostly because of yet another bigger-than-expected decline in revenues from its clothing lines. However, tears should perhaps be in limited supply given that his overall exit package will likely amount to a few million quid, which should enable him to buy his briefs at, say, Calvin Klein rather than M&S.

In days of yore, hardly anyone thought of shopping anywhere other than Marks & Sparks for their underwear, but no longer. As far as outer clothing is concerned these days, I think there is a general thought that – for several reasons – M&S clothing for men is better than it is is for women. (Certainly, I never buy my women’s clothing there.) Far be it for me to suggest to Bolland’s successor, Steve Rowe, how he should go about improving the commercial performance of one of Britain’s foremost high-street chains, but here is one personal anecdote which might point to part of the problem. 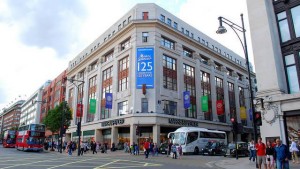 In October I bought a raincoat from Marks & Spencer in Oxford Street, London. It transpired to be perhaps the last one they sold. My son, Sam, was so enamoured of it that he went to the store two days later only to find there were none left. The assistant was most helpful: a stock check on his computer suggested there was one in the Hemel Hempstead branch. A phone call to said store elicited the information that it had gone. A further search later in the week held out hope for Middlesbrough but that ultimately proved to be a false trail as well. Sam was desperately disappointed. In the end, the persistence of the pleas became too much. I let him have the coat and slunk off to a sales shop to buy a replacement.

And the present whereabouts of that sought-after object? Who knows. About three weeks after happily taking possession of it, Sam went to a nightclub. He handed it in at the cloakroom but when he returned to collect it, the coat had gone – someone had seemingly mistakenly been given it with either no ticket or the wrong one. After a couple of days of frantic phone calls to the club, it had to be declared case closed. The coat was officially a goner. Presumably it’s now keeping someone else dry, warm and pleased.

The moral of this tale? Frankly, I’m not sure what M&S can learn regarding its ongoing business strategy other than maybe look at keeping some lines in stock for longer. However, I would advise that if there’s an item of clothing you’re particularly fond of, don’t check-it at a nightclub.

46 thoughts on “FASHION: M&S and the search for the killer coat”