FOREIGN: Sun and fun in the Algarve…and absolutely no cheap shots at Joe Hart

As the smaller of the two countries of the Iberian peninsular, Portugal in some respects seems overshadowed by Spain, even if it loses nothing in comparison as a gloriously attractive country to visit. However, the language is vaguely weird: on the printed page, it looks very similar to Spanish, but whereas the latter is a romantic tongue, hearing people speaking the distinctly guttural sounds of Portuguese makes you think Russia might have have invaded the country. But no, and hey, they’ve replaced their neighbours as European football champions!

On a very recent holiday I enjoyed some of the recreations for which the region is famous – sunbathing (see home page) and golf being two of them – but there is much more to the Algarve than that, as I have discovered in the past. Some of those beaches are magnificently unspoilt terrain, such as at Odeceixe on the west coast, on the way up to Lisbon. Life in the Serra do Caldeirao, a low-level mountain range (if one can truly have such a thing) appears to be likely much as it was a hundred years ago, yet the cluster of golf resorts around Almancil are no more than a 40-minute drive away. 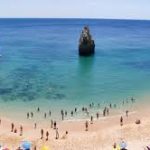 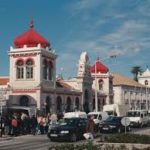 The famous covered market at Loulé 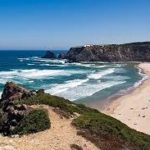 Wild and breezy: the coastline at Odeceixe

The exchange rate is always a factor when you’re on holiday but despite the recent ramifications of the Referendum and the consequent Brexit, Portugal remains – pun intended – tremendous value for money. The stalls in the covered market at Loulé have been trading for over a hundred years, too, and they remain as bargainous today as doubtless they were in days of yore. I suspect they weren’t serving Super Bock back then but I do know a beer in Portugal is very good value.

Of course, taking the bigger picture into account, holidays are about finance as well as fun, and not just from a personal perspective. The UK is Portugal’s main tourist market and the Algarve is the main destination for British tourists going to the country. In fact, Brits account for €1.5 billion of annual tourist revenue to the region, which is no less than 75% of the whole pot. That’s a lot of euros, some of which the local authorities fear might be in some jeopardy in light of the UK’s recent decision to leave the European Union, of which Portugal is a part.

Speaking of leaving, we left the Algarve last Sunday, the same day as the final of Euro 2016, in which Portugal beat France 1-0. I like to think they were dancing in the bars of Almancil and Quarteira that evening, but I don’t know because by then we were back home. However, I suspect still in Portugal at the time was Joe Hart, the England goalkeeper. He and his family and friends were having dinner in the same restaurant as us the previous Tuesday. So far as we were aware he didn’t spill any shots he might have had with his meal, and although we were tempted to go over to ask him exactly when he’d made his booking (surely not before the Iceland game!?), we didn’t. He is quite a big guy, you know.

87 thoughts on “FOREIGN: Sun and fun in the Algarve…and absolutely no cheap shots at Joe Hart”