The much-acclaimed author, Julian Barnes, won the Man Booker Prize in 2011 for his novel The Sense of an Ending, which – for what it’s worth, i.e. very little – I agree is terrific (even if/because it’s not much longer than a postcard). But here I want to talk about another brilliant Barnes work, A History of the World in Ten and a Half Chapters, published in 1989.

One chapter in particular struck home with me. ‘Shipwreck’, which itself is in two parts, tells the story of the Raft of the Medusa, a painting by Théodore Géricault. (To give it the proper title in French, it’s Le Radeau de La Meduse, an enormous canvas which hangs in the Louvre in Paris.) I enjoy looking at art but my knowledge of it, and of art criticism, could be fitted on the aforementioned postcard. Reading Barnes describe the process Géricault would have gone through to decide how to depict – in one breathtaking image! – how the survivors of the wreck sought salvation from a ship on the horizon, and the horrors they had gone though on that raft, was extraordinarily enlightening. I’d recommend it to anyone. In fact, to everyone. 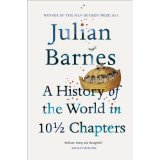 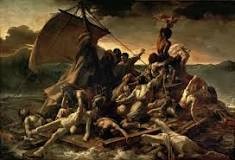 However, what gives his book contemporaneity are the current exploits of Leicester City Football Club, leaders of the Premier League this Christmas. Barnes is a Leicester fan and he’s very aware their history is not awash with honours. In the final chapter of this book, the writer has died and gone to Heaven. Gradually, he gets the hang of the place. “I opened the newspaper,” he says. “It was front-page news. Well, it would have been, wouldn’t it? Leicester City had won the FA Cup. No kidding, Leicester City had bloody well won the FA Cup!”

He plays golf, and has a caddie called Severiano. (As a keen if crap golfer myself, and a huge fan of the late Seve Ballesteros, I also loved that in his book Ordinary Thunderstorms, William Boyd names a hospital porter Severiano; after all, a porter is a caddie of sorts.) But the golf becomes a problem for Barnes’ protagonist. “You see, when I first arrived I shot a 67. Now I’m down to the low 50s…And I’m going to go on getting better…And then one day I’ll finally do the course in 18 shots…Golf would be used up.” And so he gets bored of perfection and quits golf.

Eventually paradise comes to pass. “The next day, for old times’ sake, I played another round of golf. I wasn’t at all rusty: 18 holes, 18 strokes. I hadn’t lost my touch. I watched my video of Leicester’s 5-4 victory in the Cup Final, though it wasn’t the same, knowing what happened. Later I had sex…”

But the same old, same old becomes too much to bear. He gets to figure that “Heaven’s a very good idea, it’s a perfect idea you could say, but not for us. Not given the way we are.” So not quite hell but not all it’s cracked up to be.