The makers of Official Secrets didn’t go out of their way to conjure up some fancy title for their film about this real-life story, one which is less than a couple of decades old, of a GCHQ whistleblower who ended up at the Old Bailey on charges of…er, breaching the Official Secrets Act. But then they didn’t need to. Told mostly in a resolutely non-OTT manner, it is gripping stuff even if you recall (as I broadly did) the outcome.

The film is the story of Katherine Gun, a British translator at the Government Communications Headquarters in Cheltenham in early 2003. The lead role is taken by Keira Knightley (shown on the home page), and she plays it well, portraying the complex and volatile (I should imagine) range of emotions that come into play when you take on the government and your story goes public – a sense of righteousness becoming, at least for a time, trumped by the rabbit-in-the-headlights realisation of exactly what you’ve done here and the might of the forces massed against you. 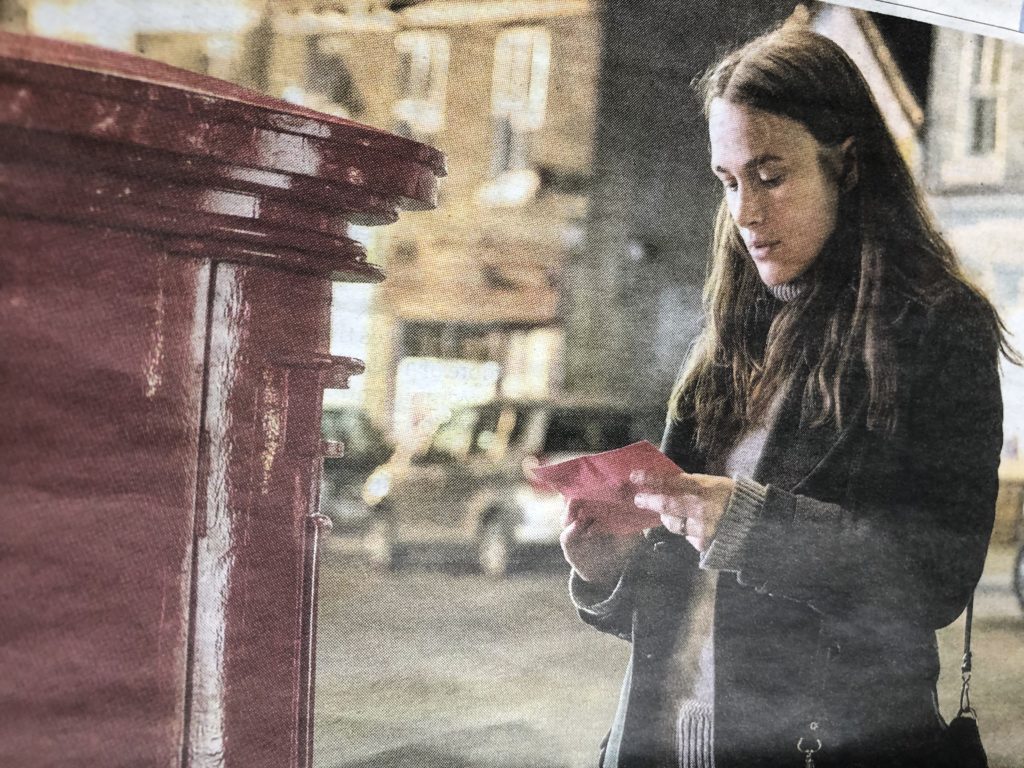 Doing the deed: Kiera Knightley (as Katherine Gun) prepares to put her official secret into the post box

Gun’s offence was to leak a memo from the US National Security Agency which showed that the Americans were trying to gather personal dirt on members of the UN Security Council in order to pressure them to vote for military action against Iraq without proof that Saddam Hussein had weapons of mass destruction. The Americans were seeking the assistance of the British, hence the email passing through Katherine’s system. Outraged, she enlists the help of an old friend who has journalist contacts. Her frustration when weeks go by and nothing happens is thrown into violent contrast one morning when she goes into a shop and sees that the front page of The Observer is her story (albeit she is anonymous at this point). She goes home to her Turkish Kurd boyfriend, Yasar, and immediately throws up. The ride now starts to get very bumpy.

The movie was directed and written by Gavin Hood. The use of contemporary footage, such as US secretary of state, Colin Powell, addressing the United Nations, and Tony Blair being interviewed by David Frost, is handled well and there are other star turns by the actors – Ralph Fiennes, as her lawyer; Matt Smith, as the journalist who gets the story into the newspaper; and Rhys Ifans, another hack who takes us back in time to what many were thinking and saying then – “They lied us into a war!” and “We’re not a fucking PR agency for Tony Blair.” (Blair, BTW, does not come out of this looking good.)

Of course, in the bigger picture, Gun’s mission failed. The (illegal?) war in Iraq duly got underway but indeed no weapons of mass destruction were ever found. Among the bad stuff going on as a ‘sideshow’ to Gun’s prosecution is the fact that the authorities have suddenly decided that Yasar should be deported. Among the more light-hearted material amid this very serious story is the dialogue delivered by Roger Alton (played by Conleth Hill), as the pro-war but even more pro-scoop editor of The Observer, and a reminder of the potential perils of spell-check.

Finally, and this is not a spoiler, I think the ending is pretty much perfect. It shows television footage of the real Katherine Gun outside the Old Bailey. This is a film, not a documentary, but the reminder that the brave woman who did this exists other than on the pages of a script is apt.