FUN: No tripping but still a light fantastic

King’s Cross used to be one of the grubbiest areas of London. If I’d had the money or the foresight, it would have been the ideal place to buy some property, say, 15 years ago. The area has two mainline rail stations, an Undergound station with more lines going through it (six) than any other, and it’s only two and a half miles from both the Bank of England and Oxford Circus. How could it not work, one day?

That day has arrived, in engine-shed loads. The coolest offices, wine bars and restaurants are opening seemingly all the time. Goods Way used to be a notorious red light district, where the only people who’d walk the street after dark would be…well, street-walkers. Today the road divides the Central Saint Martins art school from a classy walkway that leads down to King’s Cross and St Pancras stations, your gateway to Europe via train.

Over the past few days, this part of town has been central to an exhibition entitled ‘Lumiere London’, a host of alfresco installations which encourage its observers to “see the city in a new light”. The image below is the facade of the restaurants that front Granary Square just north of King’s Cross (though granted the most enterprising endeavour was surely to turn a phone box into an aquarium in Grosvenor Gardens, near Buckingham Palace). Paris may be the original city of light but this was a worthwhile response. 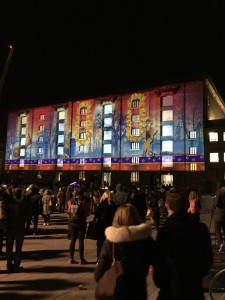 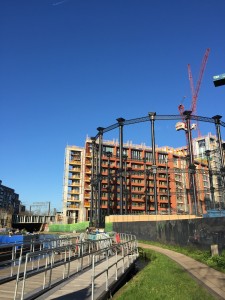 Not part of the illuminations, but extraordinary in its own way, is Gasholder 8 (above). This was the biggest gasometer in the area when it was built in 1850 to supply energy from the largest gas works in the capital. It was decommissioned in 2000 but the frame was carefully dismantled and refurbished in Yorkshire in 2011 and then returned to the King’s Cross/St Pancras area and relocated on the north side of Regent’s Canal, where today it stands amid new landscaping and paths which lead to the canal towpath. Their original reason to exist having long gone, it is praiseworthy that a new purpose has been found for what used to be iconic landmarks on the urban skyline.

Finally, after the gasholder, breakfast (sorry, that should be fruhstuck) at the German Gymnasium, situated between both train stations. I know, it’s a weird name for a restaurant and German jokes are famously no laughing matter, so I can’t quite work that one out. Whatever, you can see that the speck & egg brotchen would bring a smile to the face of anyone with a hunger. The coffee, being way too traditionally teutonic for my taste, was another matter. 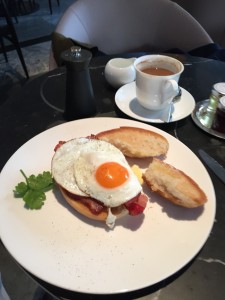 49 thoughts on “FUN: No tripping but still a light fantastic”