FANTASY: Absolutely not having a whale of a time

Talking of blubbering, whales sadly seem to have needed a lot of help recently. The problem is, they’re just so damn big. Beach itself on the Norfolk coast, as many have been doing all too regularly, and a whale is not an object that a handful of beachcombers can manage to drag back into the sea, even if they are hardy enough folk to be out by the North Sea in winter. Life is manifestly not a beach for whales. It’s death. (Of course, these days, what with the story of Jonah and the whale in mind, I assume the border authorities need to check them out for possible people-smuggling.)

Making a transparently clumsy link to keep on the subject, I was reminded when reading the aforementioned piece of a wonderful rant by Peter Cook, playing Clive, in conversation with Dudley Moore (Derek) in their swear-word laden 1970s sketches, on the matter of whales, and the fantastical leap of imagination he made to pillory the poor mammals for letting down the human race. (I have undertaken some editing, mostly to deal with the abundance of expletives.) 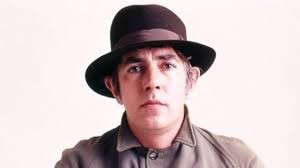 The irrepressible and irreplaceable Peter Cook

Cook/Clive gets underway. “Some [guy] comes on telly and he says: ‘Oh, the whale is being wiped out by mankind. Save the whale.’ Well, during the war, did we notice a lot of whales rallying round and saying: ‘Save England’? I didn’t notice many down my part of the world. I didn’t see whales coming up with Union Jacks saying: ‘We’ll fight the Boche.’ No, they were doing fuck all, swimming around the sea sucking plankton!”

There was quite a bit more in this vein – “they’re such [strong expletive] they can’t even breathe underwater. They have to keep coming up the whole fucking time and spouting” – and Dudley Moore was, as ever, a giggling wreck. Of course, Cook did have a point. There they come, beaching themselves at Brancaster, hurting our holidays, when they have a whole ocean to swim in. The problem is, I guess, that we’re never going to win any argument with them about what have they ever done for us. It would be fantastic if we could but that’s another problem with whales. They’re so crap at reasoning.

539 thoughts on “FANTASY: Absolutely not having a whale of a time”