FANTASY: Death of the Playboy

You may have read that Hugh Hefner died recently, aged 91. In theory at least, being the founder of the Playboy empire, he had lived the sort of of lifestyle that many men would have indeed thought to be a fantasy. The American sportswriter, Red Smith, once said: “Dying is no big deal. The least of us will manage that. Living is the trick.” I guess one would have to concede that ‘The Hef’ lived a little, even if rather luridly in his Playboy mansion, copulating with his copious lovelies.

He launched Playboy magazine, the vehicle upon which his business was built, in 1953. The centrefold of the first issue was a naked photograph of Marilyn Monroe. It reportedly cost him $8,000 to publish that debut edition. It sold more than 50,000 copies. Bingo! Or, rather, Bungo! Depending on your point of view, he was an immoral businessman who preyed on women or a shrewd entrepreneur who, according to Pamela Anderson, “gave me my life”. And while the overriding image of the magazine is about images of barely-dressed women, its interviewees included Frank Sinatra, Fidel Castro, John Lennon and Jimmy Carter (Donald Trump, BTW, told the magazine in a 1990 interview: “I don’t want to be president. I’m 100% sure”) and among the eminent authors to have written for the title have been Ian Fleming, Jack Kerouac and Joseph Heller…and Margaret Atwood and Donna Tartt. There was frequently much more to Hefner’s magazine than met the eye, even though what first and foremost met the eye tended more to lubricity than the literary. 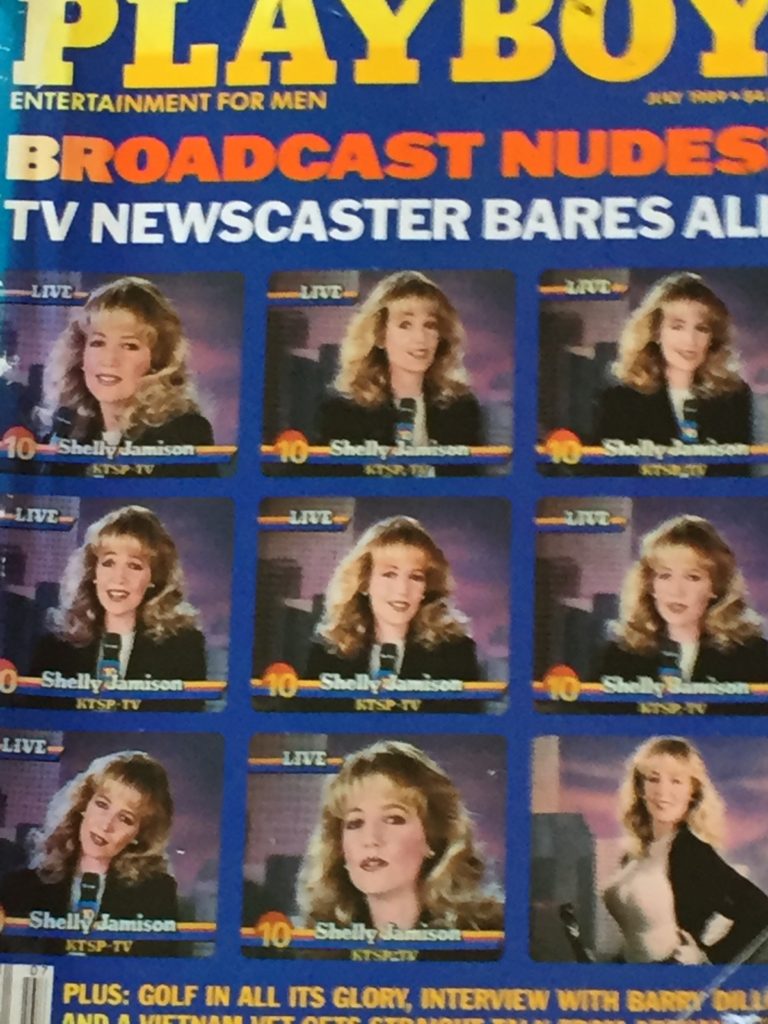 A copy of Playboy. As you’ll have guessed, I bought it because of the golf cover line…and the cartoons!

It used to be one of the most remarked upon faux excuses ever: “I only buy Playboy for the serious articles.” And for the cartoons, of course (of which more in a moment). And indeed it was the case that I only bought the one shown here because of the cover line about the golf story, being very much more interested in buggies than bunnies. Of (golf) course.

In 1988, I was working for a magazine in the States. On one day I was going to be flying back to London from New York to spend a week or so at home, but before heading to the airport I attended a function of the American Society of Magazine Editors at some swish Manhattan hotel. On the way out, one of the women attendees and I bumped into each other.
“I’m sorry,” I said.
“You’re British,” she replied.
“Yes, the accent is a giveaway, I guess.”
“No – because you apologised even though it was my fault.”

Her name was Michelle Urry and she was the cartoons editor for Playboy. We had a brief chat and agreed to meet up for drinks once I got back to New York. In those days, of course, there were no mobiles, so when she rang it came through on an office landline.

“Robert,” said the woman who had taken the call. “I’ve got a Michelle Urry on the line for you”. [Pause.] From Playboy magazine.”

I took the call, we fixed to meet, and that was that. Except, of course, it wasn’t. The looks I got from the woman and her three colleagues were a mixture of utter bemusement, huge disapproval and reluctant admiration.

But the damage, or the reputation-enhancement, had been done.

55 thoughts on “FANTASY: Death of the Playboy”