While cycling has not taken over London in the way it has in, say, Amsterdam, it is increasingly a popular way to get around town. And rightly so. It’s environmentally friendly and it’s great exercise. I don’t do it myself but that’s my problem. As a car driver, I like to think I’m courteous and considerate of cyclists, and I am very aware of the horrible number of cycling fatalities there are, to a gross extent caused by cyclists being hit by dumper trucks or other egregiously large vehicles to be out and about on the streets of the capital. 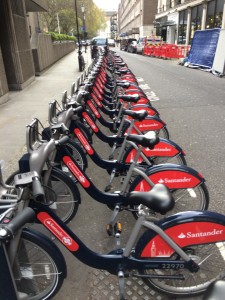 But (you knew there’d be one), I do have a problem with some cyclists. These are invariably male, usually youngish, who act like they own the road, even though if anything went wrong they would be likely to come out on the wrong side of an incident with a car. It’s like that ridiculous old joke (as ridiculous as my last one in this section, about a penguin driving through the desert) about two pieces of tarmac chatting in a bar. A piece of green tarmac walks in and one of the other two turns to his friend and says: “I’m not going near him. He looks like a cycle path.”

So, partly inspired by the John Lennon song, imagine if cyclists…

…never wore headphones. They’d then be more aware of what’s going on around them, making life safer for them and for pedestrians.

…always used hand signals. And I don’t mean liberally giving the finger to all and sundry.

…never ignored traffic lights, especially green lights on pedestrian crossings. Some of them seem to delight in ‘bullying’ walkers, perhaps as a perceived revenge for how drivers treat them.

56 thoughts on “FANTASY: If only cycling were done like this…”