Over 60 years ago, Vue magazine called Soho “the world’s wickedest square mile”. It wasn’t because of its all-round badness; rather specifically the sort that is appearing to entice the elderly couple shown in the photo on the home page. It’s par for the course. There are four main north-south streets in the heart of Soho, running from Oxford Street down to Old Compton Street. From east to west, these are Greek, Frith, Dean and Wardour. I’m told that when taxi drivers are learning the ‘Knowledge” (their mental map of central London) the mnemonic by which they ensure they get them in the correct order is ‘Good For Dirty Women’.

OK, so this is an acquired form of fantasy, but it is part of what Soho peddles. A smallish photographic exhibition in the West End brings some of this to life. Called Shot in Soho, it is an agglomeration of materials from the 1960s through to earlier this century taking in strippers relaxing between shows (it probably won’t wholly shock you to know that the first thing you notice is not the nudity but the smoking) to late-night police raids; from black-and-white portraits to the rather gaudy set-up shot depicted below. 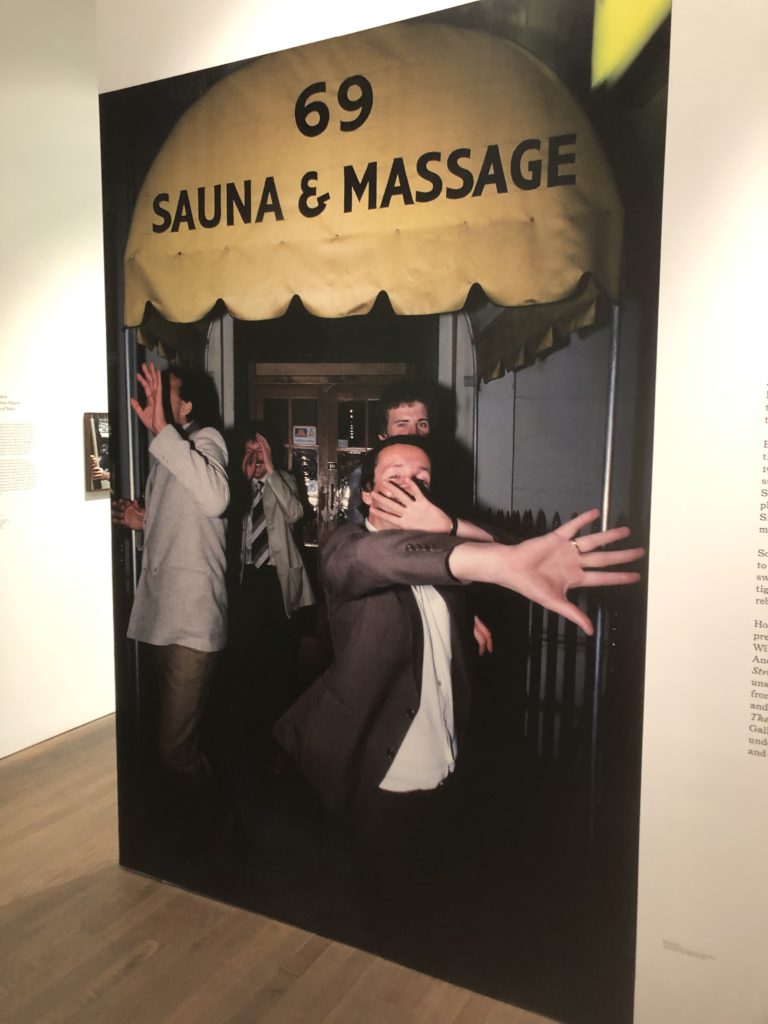 Although they are of similar size, there is no confusing this with the other square mile in the capital – i.e. the City of London. But the differences are gradually becoming less marked. Coffee bars now outnumber sex shops; trendy new offices are springing up; the construction of the (oft-delayed) Crossrail network and its hub at Tottenham Court Road is sure to have an impact on the character of the area. But there are still the famous old pubs, such as the Coach and Horses in Greek Street, immortalised by Keith Waterhouse’s play Jeffrey Bernard Is Unwell, the part of the eponymous writer originally being taken splendidly by Peter O’Toole. (The title was the excuse given in The Spectator when Bernard had gone on one of his notorious benders and was thus unable to file his copy; Bernard himself lived nearby in Berwick Street.) There are the modern clubs, like the Groucho and Soho House, both in Dean Street. Sitting inside or outside at Bar Italia in Frith Street you could indeed feel as if you’re in Italy. The thing is that while Messrs Bernard, O’Toole and Waterhouse are no longer with us, Soho remains very much alive.

The Shot in Soho exhibition is at the Photographers’ Gallery, 16-18 Ramillies Street, London W1 until February 9.