FANTASY: The story of how Rowan Pelling came again

Last week saw the appearance of the debut issue (styled May 2017) of The Amorist, the brainchild of Rowan Pelling, previously founder of the Erotic Review. That title launched in 1997 and Pelling inevitably became dubbed its ‘editrix’. In 2004, the magazine was bought by Penthouse, so she must have been doing something right. As befits a person who attended a school for the daughters of missionaries (feel free to insert your own joke at this point), Pelling – she is pictured on the home page – has between the editorships been, inter alia, “a sex columnist for GQ” (sounds like a job to kill for) and has established herself as a brand in the erotica business to the extent that her name is in the subhead below her new magazine’s logo. However, she recently joked in the Sunday Times that she is the only person not to have made money out of a lifetime in sex. Well, I guess you can’t be a slave to love and expect to have it all financially as well?

The proclaimed intention of the magazine is “to reclaim desire, intimacy and the consolations of sexual love from the misery of internet porn…to place mystery and imagination back at the fore of erotic culture and to reinstate passion as the acme of human experience”. Blimey. Its target audience, as one might expect, is both men and women, and the writing is liberally laced with humour – and gossip. For example, did you know that the former Dr Who and Broadchurch cop, David Tennant, now starring in Don Juan on the West End stage, is apparently known in showbiz circles as ‘David Ten-Inch’? Me neither, but I doubt anyone will be hearing from his lawyers any time soon. (BTW, I am looking into the prospects of being able to take out a patent on jokes using the words broad, woman and David Tennant.) 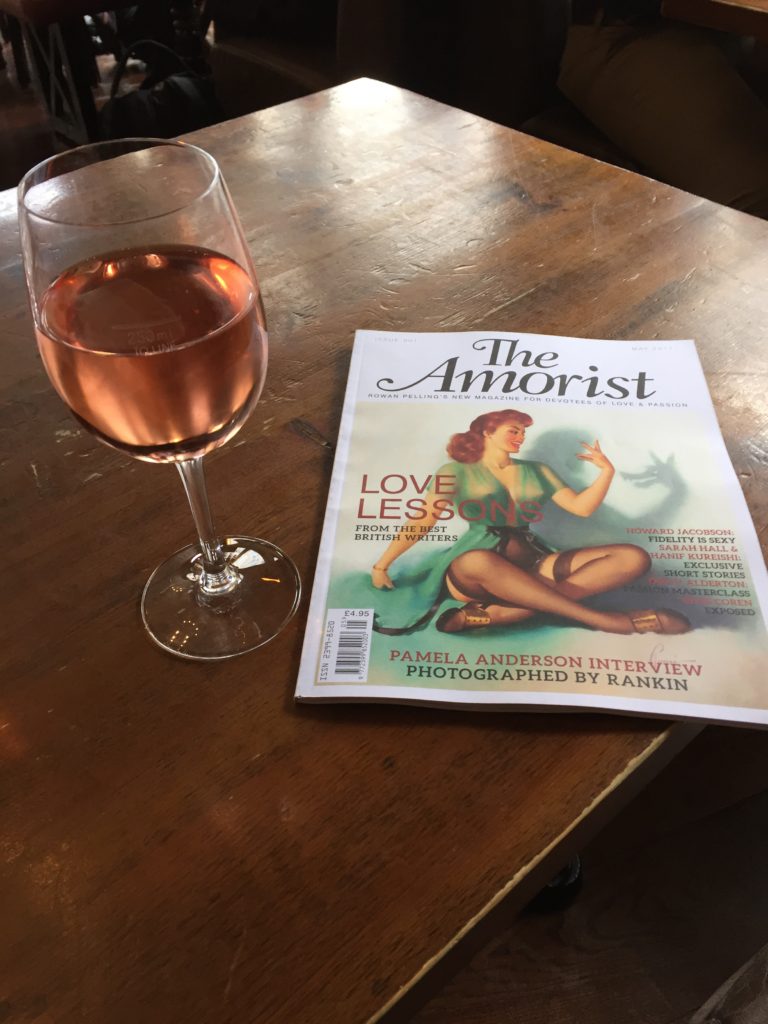 Given the editorial content of The Amorist, for some people it might be best read with a glass of blush

Elsewhere, the suggestions of the author’s acquaintances when asked to compose a six-word story on an erotic theme are imaginative and hilarious. I won’t spoil the fun – or perhaps I should say fantasy – for you here but they reminded me of the old joke about the schoolchildren who are asked in an English lesson to write a short story involving religion, royalty, sex and mystery. One kid puts their hand up after less than a minute. Startled, the teacher asks what they have written. Thus comes the answer: ‘Christ,’ said the Princess. ‘Pregnant again. I wonder who’s it is this time?’

Given that it’s a first issue, getting readers’ letters would obviously require some planning;  i.e. giving them advance notice about it. Good of Jeremy Paxman – “Oh, just what we need. Yet another magazine about sex” – to help out. Among the contributors in this issue in a more conventional sense, in one capacity or another, are Pamela Anderson, Howard Jacobson, Hanif Kureshi, John Niven and Giles Coren. That’s a fairly impressive starter for ten…

…or actually under a fiver. (Again, feel free to insert your own joke.) The Amorist in fact costs £4.95 per issue. It is available from all good newsagents – although obviously it’s preferable if you can get it from a bad one.

102 thoughts on “FANTASY: The story of how Rowan Pelling came again”