FANTASY: Trumpton – figures but perhaps not facts from the White House

January was quite a month for Donald Trump. He became President of the United States. Fantasy became a reality, as in a former reality TV host achieved his fantasy and went to live in the White House. Who said dreams don’t come true? (Maybe that was Hillary Clinton?)

Last Thursday evening, I vaguely caught an item on the TV news. Jon Sopel, the BBC’s guy in Washington – although at that particular moment in Philadelphia – was saying something about Donald Trump continuing to allege that Clinton had won the popular vote, as opposed to the electoral college which had propelled him to the presidency, because she had received between three and five million ‘illegal’ ballots. The basis for this was apparently a conversation he’d had with the German golfer, Bernhard Langer, after the latter had seemingly endured a lengthy queue to vote in Florida. Making a mental note to check this out the next day, I went to bed…

…and next morning it was all over the internet. The story happens to have many of the elements of a classic Trump tale: lies (sorry, “alternative facts”), his obsession with ratings (such as how many people attended his inauguration versus Barack Obama’s), and his love of golf. To begin with the end, I love golf, too, but mostly Trump gives it a bad name. I know, I know… it has one already, what with charges of misogyny, elitism and nastiness. (MEN for short.) In The Guardian last week, Suzanne Moore characterised Trump’s friendships as “segregated golf-bore wisdom”. I know, I know…she’s a woman and it’s The Guardian, but I get her point about “funny chaps, women” type-conversations. 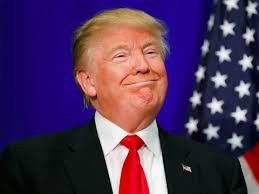 I think golf is a great game. It’s not only one which, age-wise, can be played enjoyably from childhood until just short of the grave,  it teaches you honesty, integrity and respect for one’s opponent. Lord knows how The Donald took to it, although vaingloriousness might be part of that. (A quite shocking allegation, I know.) I mentioned in a blog last month a golf journalist, Jock Howard, whom Trump was keen to engage with because he was responsible for overseeing the Golf World rankings of the UK’s best courses and The Donald owns a couple of major courses in Scotland. It’s the ratings, stupid. A couple of weeks ago, David Owen wrote in The New Yorker about an account he’d written of a round of golf with Trump in 2012. After the article appeared, Trump rang to complain about it, even though it was in general flattering. He was annoyed Owen hadn’t mentioned he’d shot 71, one under par. “I hadn’t written that,” said Owen, “because he hadn’t shot 71” – they had conceded each other putts and the general stuff you do in a friendly game, which means they hadn’t been keeping score. But this is post-truth Trump. Owen added: “In Trump’s own mind, I suspect, he really did shoot 71 that day, if not (by now) 69.” That probably nails it. He’s a golf fantasist.

I’m sure Trump never lies. Or rather, he believes it’s true when he says whatever it is, even if he’s completely changed his mind an hour later. As for the Langer story, he told Golf Digest: “The voting situation reported was not conveyed from me to President Trump but rather was told to me by a friend. I then relayed the story in conversation with another friend, who shared it with a person who has ties to the White House. From there, it was misconstrued.” In fact, Langer is not registered to vote in America, so he was never in any queue. But I guess that ‘s the trouble with fourth-hand information. (I do hope Theresa May got the president’s reassurances about NATO from him rather than off the bellhop at her hotel.) And as for that wall, I can’t begin to imagine how annoyed The Donald must feel about the PGA Tour having taken its World Golf Championship event in early March away from Trump National Doral in Miami and handed it to Mexico City.

Finally, in mid-January, Vladimir Putin, the Russian president, said of rumours suggesting that Trump had once consorted with Moscow prostitutes: “They are without question the best in the world but I doubt Trump took the bait.” That’s not how statesmen are supposed to talk! That’s pimp-speak! However, given the remark in his inauguration speech about “buy American and hire American” being his presidential credo, I’m somewhat astonished The Donald didn’t leap to the defence of American sex workers and declare that the land of the free and the home of the brave was also the country with the world’s best hookers. (BTW, I’m not talking here about golfers who over-egg a draw.)

49 thoughts on “FANTASY: Trumpton – figures but perhaps not facts from the White House”