Imagine Donald Trump becoming President of the United States. Preposterous! A black fantasy! It would be like Sacha Baron Cohen becoming Prime Minister of Great Britain. Not a chance. And…what do you mean, it might?…

Welcome to the unreal world, where the land of the free and the home of the brave is collectively going bonkers for a man who’s…well, bonkers. (The prospect of his presidency is apparently, officially, the sixth biggest risk to the global economy.) Donald Trump makes up policy on the hoof and then disagrees with himself the next day. He’s a human dichotomy. Also an utter dick, some might say, albeit after his “small hands” spat with Marco Rubio, whatever you do don’t call him a bit of a dick. No, sir. Because ‘The Donald’ is big on bigging himself up even if he’s not averse to trying to put other people down. George Clooney recently recalled that they’d met once and Trump had said Clooney was very short. George protested: “I was sitting down the whole time, Donald!” Clooney now says Trump is “a xenophobic fascist”, which is probably harsh but fair.

Despite his sweeping support across America, Trump could be denied the Republican nomination at the party convention in July – which suggestion made him go all Kaiser Chiefs; he predicted a riot – but if he takes his momentum beyond the summer and past Hillary Clinton into the Oval Office, we can expect changes. For a start, there will likely be a partial rebranding (although granted The Donald doesn’t normally do things by halves) of his residence, which will henceforth be known as the Trite House. 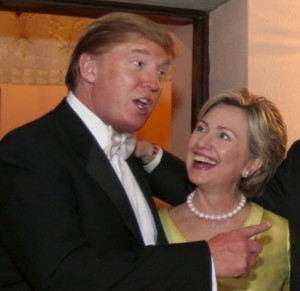 Best mates? The Donald will have to get past the former First Lady to get into the White House

Trump is a self-proclaimed billionaire – the widespread belief is that he won’t reveal his tax return not because he’s dodging taxes but because he’s not as rich as he says he is – who has managed to cast himself as the hero of the everyday American, not least because the modern Republican party stands for all that many Americans hate: the greed of Wall Street, the cost of foreigns wars and the embracing of globalisation, which to the regular guy and gal is a euphemism for eliminating jobs in America. Trump has tapped into this disconnect between politicians and public to great effect.

As a consequence, he can pretty much get away with anything. Make that everything. For example, he says he’s anti-abortion but he approves of the biggest abortion provider in America. He’s been married three times, doesn’t ask God for forgiveness and yet he’s the most popular candidate among evangelical Christians. After winning one primary thanks to a large number of votes from the most deprived areas in the state, he declared: “I love the poorly educated.” As if it was a compliment! As for Rubio’s strategy of joining Trump in the gutter with those penis-hinting insults? Stupid. It’s like the line about why you should never wrestle a pig: you both get dirty but the pig likes it.

Meanwhile, word has it that The Donald is taking an unusual interest in the Boat Race this coming Sunday. Not Cambridge vs Oxford; he couldn’t care less about that. No, it’s the undercard that has grabbed his attention: Goldie vs Isis. That’s Good vs Evil. It’s Him vs Them. Let’s put it this way: if the Trumpster has got the button at his fingertips this time next year, you wouldn’t tempt me into the Oxford second-team boat whatever the size of the cox.