FASHION: A hole new meaning to the word ‘distressed’

On the home page of this blog is the back side of a perfectly normal pair of jeans. Jeans are an item of clothing that dates from the Gold Rush in California in the 1850s when a pedlar by the name of Levi Strauss, in collaboration with a tailor, endeavoured to manufacture trousers that would be sufficiently hard-wearing to meet the requirements of those who had flocked to the American west coast in order to prospect for their fortunes. I think it’s fair to say that their endeavours were successful. Today blue jeans are perhaps the sartorial equivalent of a Coca Cola – they work for everyone, regardless of age, sex or wealth. The fashion designer Yves Said Laurent once said he wished they had been his creation because they “are expressive and discreet, they have sex appeal and simplicity – everything I could want for the clothes I design”.

That’s enough about the history of jeans. If you want to find out more then go to Wikipedia. (Where do you think most of the above came from?) Of course, fashions in jeans have evolved over the years, including bell-bottoms, baggy and skinny jeans. Nothing wrong with any of that – well, it can look very wrong when you see some body shapes in tight-fitting jeans, but we’ll not go there – but how the hell did we get to the point where we wanted to have holes in them? 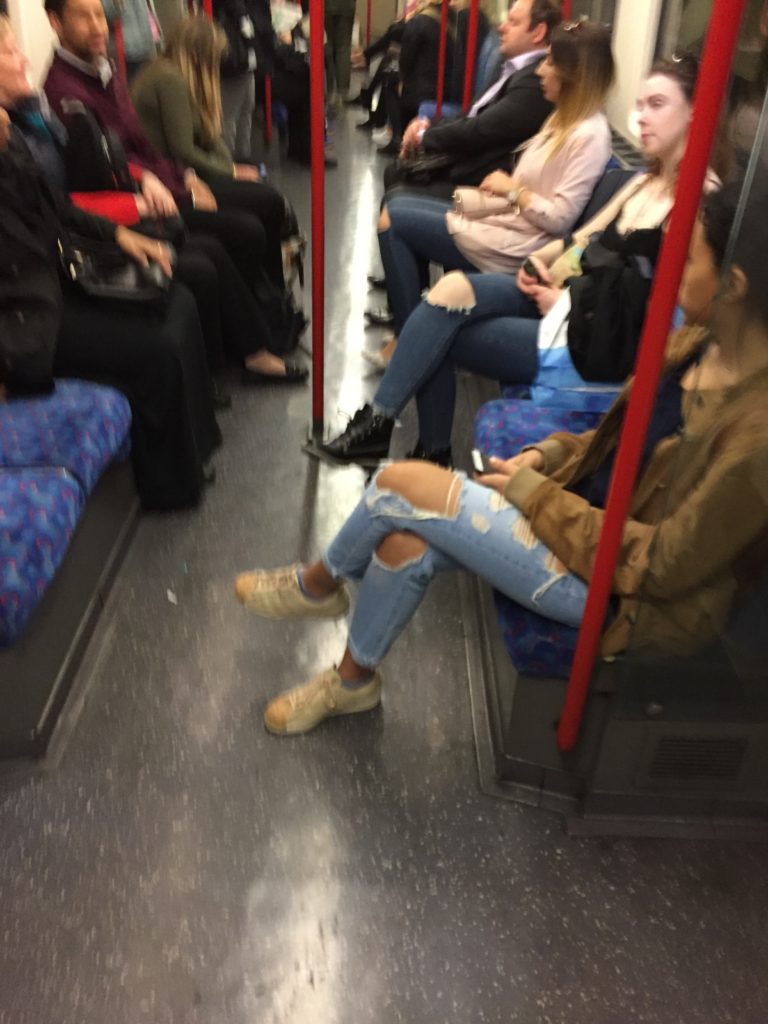 A ripping journey on the London Underground: is it possible these three women were going to Neasden?

I wonder how the mind-set went of the first person to get dressed in distressed jeans – “This is good; it looks like they’re the only pair of trousers I have and I can’t afford to fix them”, perhaps? Apparently the trend towards wearing jeans that were slashed, most commonly around the knee, began in the mid-1980s. (OK, I admit it, Wikipedia again.) When the manufacturers saw that young bohemians liked them like that, they decided to take the middleman – i.e. the customer – out of the equation and began to produce jeans that had tears in them, looked faded or generally beaten up. And, because it was the in-look, jeans that were less than whole, more about holes, were priced at a premium. You paid more for less.

I’m not entirely sure why but the situation reminds me of an old take about going to a craft fair where’s there’s an entry fee. ‘So let’s get this right. I’m paying £2 to look at things people have made themselves? Have made themselves. But I can go into Harrods for nothing! Where’s the sense in that?’ Precisely. Where is the sense in any of this? At least if you’re going to have rips in your jeans, do it yourself. I’m sure that YSL would approve of DIY in this circumstance.

A recent issue of Private Eye had a cartoon about a new trend for ‘ridiculously expensive mud-stained jeans’. As one might expect, they cost the earth. Haha! But, hey, maybe organic jeans are only a matter of time…

398 thoughts on “FASHION: A hole new meaning to the word ‘distressed’”