FASHION: Cover girls and no more Burberry going up in flames

Britain’s newest star of track and field is on the cover of this week’s Evening Standard magazine. Dina Asher-Smith won three gold medals at the European Championships in Berlin last month – 100 metres, 200 metres and as part of the victorious sprint relay team. I guess this is a smart move on the part of the companies in whose clothes she is photographed; it must be hard to get a better model than a highly-tuned athlete.

Meanwhile she has completed a history degree at King’s College, London; a dissertation on the history of jazz, encompassing race relations and the role of the media. She has a quick mind as well as fast feet. And she likes her fashion. “It’s important that people – young girls, everybody – see female sports people outside their cropped tops and shorts,” she says. Her mother promised to buy her a particular Chloé bag if she ran the 100 metres in 10.85 in Berlin. “In our heads 10.85 was such a crazy time,” she laughed. It also happened to be precisely the time she ran. 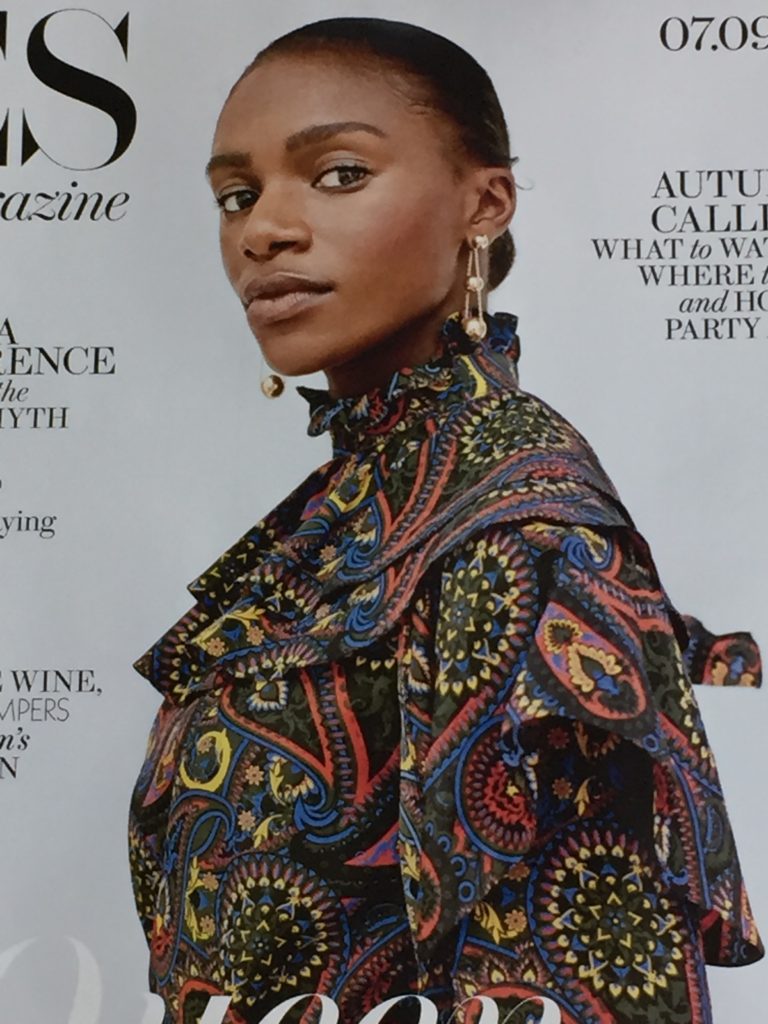 Meanwhile, the new issue of Vogue has a cover story and a major feature on Victoria Beckham. Inside she’s featured sitting on some grassy expanse while a dog leaps over her. David is in the photo, smiling away, while around them their four children lark about with (very obviously) fake guns. The BBC website ran a story about the Vogue spread and noted that VB is “best known for her fashion line, Spice Girls career and marriage to footballer David”. It added: “One thing she’s not known for, however, is smiling – in fact she’s rarely ever seen in public without her famous frown.” Sure enough, on the cover with her kids and/or inside while she’s playing at being a canine hurdle, there is no smile to be seen. I wonder what it takes to get her to grin?

In other fashion news, Burberry (whose signature clothes lining is shown on the home page) yesterday announced it was committed to ending its policy of burning unsold clothes and other fashion items. Yep, it used to put products it couldn’t get rid of on a  pyre. Over the past five years, this has amounted to goods worth about £90 million. Nope, that’s not a typo – 90 million. One wonders if someone might write a book about the practice? If Tom Wolfe hadn’t got there first, I guess the title might be The Bonfire of the Vanities? Burberry used to defend what it did, stating it was protecting its brand by stopping product from being abused by counterfeiters – but where on earth is the logic in that? they could just buy one and then knock it off! – but the company had realised what it was doing was environmentally irresponsible. (Also mentally irresponsible, I’d have thought.) So long as it doesn’t start running an ad campaign under the tagline of ‘waste not want not’, I guess we should all be grateful Burberry has had its Damascene conversion. It’s more of a pity that no one can get Bashar al-Assad to have one of the same.

79 thoughts on “FASHION: Cover girls and no more Burberry going up in flames”