That Cara Delevingne, hey? She sure gets about – for example on the covers of both Vogue and Love as August saw the traditional publication of the blockbuster September issues of the upmarket fashion magazines. These tomes represent heavy lifting. The Guardian stuck Love on the scales and it weighed in at over two kilograms. Vogue wasn’t much lighter. And no wonder. All those advertisements! In the latter there’s no editorial to read until you reach page 77. The first feature (about Cara, of course – “you have to dig deep to really get to know yourself” she suggests) doesn’t arrive until page 248. Somewhere after page 360 there’s a section on property sales. And I think it’s safe to assume the ads are all paid-for, unlike the Ralph Lauren one shown on the home page here.

It’s all high-end stuff, I guess maybe with the exception of a guy sporting the slogan ‘GET OFF MY DICK’ on the back of his T-shirt (page 264, to save you the bother) as he stands resting his hands on a kitchen unit while next to him there’s a girl, fully clothed, looking vacantly into the middle distance with her hands…no, they’re holding a tray. Yep, it stumped me as well. 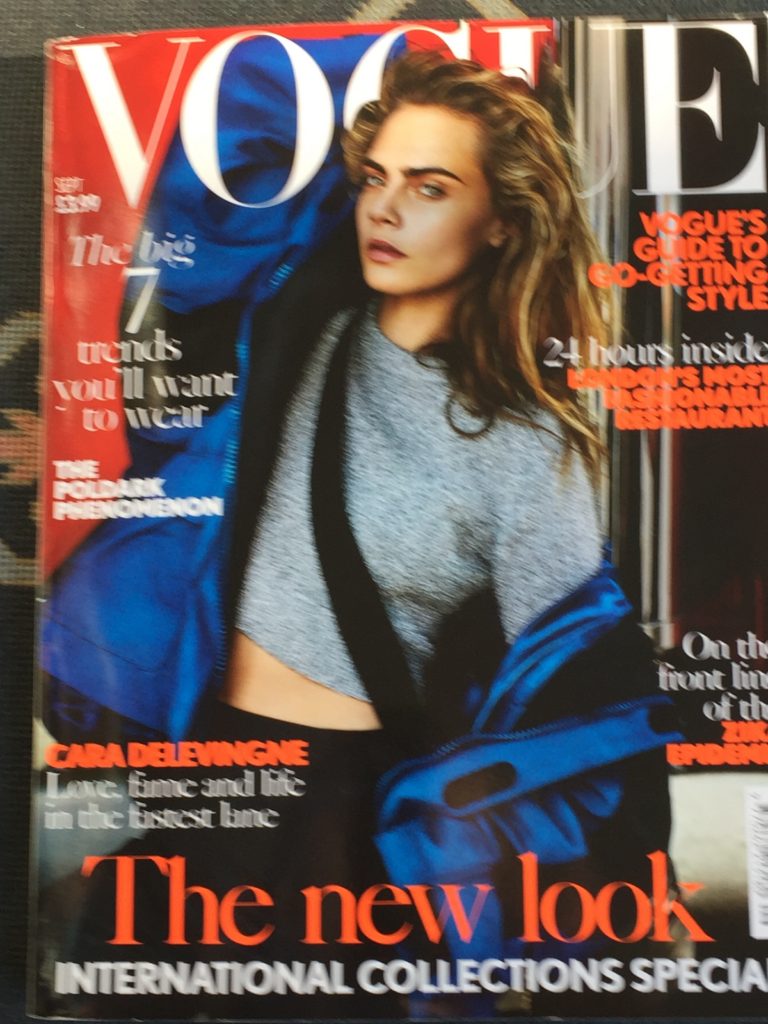 She’s very much in vogue: it’s Cara in Balenciaga talking about “love, fame and life in the fastest lane”

It has to be said that, priced at £3.99, Vogue certainly represents page-wise value for money. I’m not so sure about the bright-blue anorak from Balenciaga that Cara is sporting on the cover (it’s hard to tell if she’s putting it on or taking it off) which comes in at £1,615. Meanwhile, over at Love, I was being slightly disingenuous in saying Cara was on the cover there, too. This has alternative versions, the other option being Margot Robbie, the actress who stars with Cara in the recent film, Suicide Squad. They interview each other and discuss how they respectively store Prince Harry’s name in their mobiles. (Please, no jokes about speed-dialling.)

Elsewhere in this market, Elle goes for Kristen Stewart on the cover and features Zayn Malik inside. The actress Chloe Grace Moretz wears Gucci on the front of Glamour – which tells us that within its pages she reveals “the epic life advice she got from Victoria Beckham” but I obviously don’t want to spoil that for you – while the cover role on Porter is taken by model Edita Vilkeviciute, wearing a Prada coat and clutching a kitten. (Feel free to insert your own joke here.) Rather like the aforementioned Delevingne cover, which you can see above, the Vilkeviciute shoot evidently called for her to pose with an off-the-left-shoulder look.

Admirable as these publications are, they cannot measure up to the exclusivity of Egoiste, the French title which was first published in 1977 and the 17th issue of which came out in January last year. No, that is not a typo. Egoiste No 17 featured Cate Blanchett on the main cover and was priced at 35 euros. (To be pedantic, each issue is a double issue: two magazines for the high price of one.) The magazine was founded in Paris nearly 40 years ago by Nicole Wisniak. Produced entirely in black and white, it is a single-handed labour of love, which explains the lengthy gestation period of each edition. Even the advertisements are editorial of a kind. The clients – who include such as Dior, Hermes, Mercedes, Swarovski and Vuitton – hand over their money and Wisniak designs how their products are going to be promoted in her magazine. I’m guessing No 18 will appear sometime in 2019. I’m not putting money on Cara being on either cover.