FASHION: Meghan’s sparkle not a bright light for everyone…it seems herself included

On the sixth page of editorial in the September issue of Vogue, which is actually on page 84 of the magazine she is guest-editing, Meghan Markle, aka the Duchess of Sussex, makes a confession which (given what you’ve had to get through to get to this point) makes you think ‘She’s not kidding’. She writes: “There is one caveat for you to remember: this is a magazine. It’s still a business, after all. I share that to manage expectations for you: there will be advertising sections for every issue…please know that there are elements that just come with the territory.” Indeed – as in 93 of the first 100 pages are advertisements.

In the editorial bits, she has selected 15 women to be featured. One of these is Jacinda Ardern, prime minister of New Zealand. Another is the actress Salma Hayek, who is married to the boss of the luxury-goods group, Kering, a huge advertiser in the magazine. A church vs state conflict there? The main lady herself is shown on the home page here, although not on the cover of Vogue. It’s a heck of a sized issue to have guest-edited, although one figures not so a big job as being in charge of ad sales. 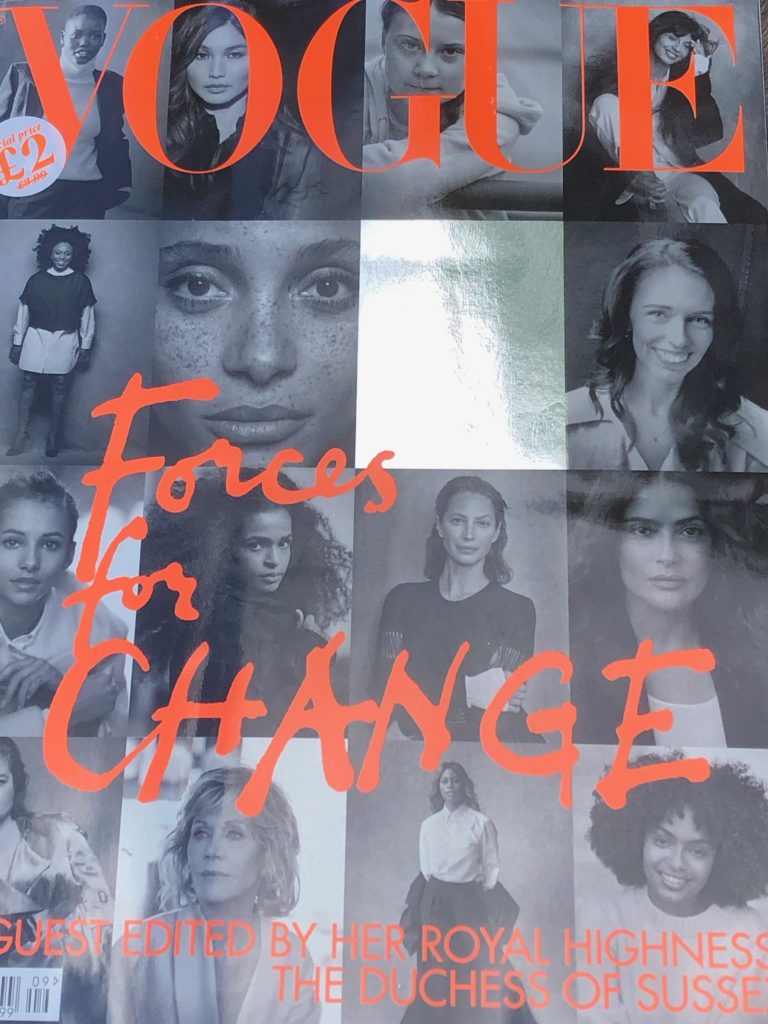 The front cover of the September issue of Vogue, which weighs in at 370 pages and about 3.7 pounds

Meghan also writes: “I know how important the September issue is for the fashion industry. I realise the reach, and I see the opportunity to be part of fashion’s push for something greater, kinder, more impactful.” Quite how the content therein plays any part in that sort of aspiration  is difficult to fathom, at least for me, but I’m sure it must be in there somewhere. It’s kinda (kinder?) hard to be sure when there are so many paid-for pages in the way. Meanwhile, Meghan herself announced last month that she would be unveiling her own line of clothing, although that’s obviously coming a bit too late to give herself a plug in the iconic fashion pages of this particular issue. Perhaps next time, or maybe not at all, given that having acknowledged the importance of the September issue she wrote “just as readers gear up for the September fashion shows, where judgement can become clouded and focus skewed toward the superficial”. Does she mean ‘the lucrative’? Who knows where it’s all going.

Another of the 15 featured women is Greta Thunberg, the teenage climate-change activist from Sweden. The last issue of Private Eye had some sport in pointing out that Johan Svensson, the creative director at Vogue who organised that shoot, takes two return flights a week between London and Stockholm. Thunberg famously avoids air travel because of the damage it does to the environment. The matter of Meghan’s hubby, Prince Harry, flying to Sicily to address scores of private-jet flying millionaires at a luxury ‘Google camp’ about climate change did not come up in any conversation with Greta so far as we know. However, I’m sure some of the attendees for Harry’s speech were clad in clothes that wouldn’t have been out of place in Vogue.