FASHION: Never mind the bum, is the world big enough to cope with two Kims?

Poor Kim Kardashian. She is no longer the most notorious Kim on the planet. Weapons of mass distraction can’t compete with weapons of mass destruction when it comes to the big news. Kim Jong-un has taken this high-stakes celebrity game to another level. In fact, into the stratosphere. Unlike him, KK has not been the subject of an emergency meeting of the United Nations Security Council (having said that, if Geri Halliwell can be a UN ambassador, a Kardashian debate in the chamber surely cannot be out of the question?) so she really does need to up her game if she wants to compete with a deranged dictator.

It’s not a question of does her bum look big in whatever it is, to which assuredly the answer is going to be ‘yes’. It’s all about the size of his rocket and how large might be his bomb on it. Kardashian may put passion into fashion but KJU puts stuff into space, which he did last Sunday when North Korea launched a satellite which the West (that means countries like the UK and the US, BTW, not KK’s hubby Kanye) regarded as the possible testing of a ballistic missile. Faced with such extreme provocation, what’s a girl to do? That’s right – go nuclear. Her retaliation to the launch fall-out was almost to fall out of her dress during a television interview. As you can tell from the image on the home page, she perhaps used a photo shoot for Rolling Stone magazine to start working on that particular move. (For the purpose of purposefully keeping Kanye pretty much out of this, I’m not getting into Thursday’s Madison Square Garden launch of his new rocket…sorry, new album.) 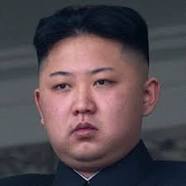 The Korean Kim captured in one of his happier moments

Odd as it may seem, our two Kims do have things in common besides their names. For example, they both have a penchant for the word ‘North’; for one it’s part of the name of the country they run, for other it’s the name of her daughter. They both feature in a reality show. KJU’s is a very scary one, which earlier this week involved him having his army chief of staff executed; KK has a programme on the E! channel called Keeping Up With The Kardashians. There you have it in a nutshell – Kim’s Korea and Kim’s career. It’s insanity versus inanity.

Ultimately, are the Kims similar or different? I guess it comes to down to the fact that one chooses to behave like a world-class ass while…well, I’ll leave it to you to choose your own end…

80 thoughts on “FASHION: Never mind the bum, is the world big enough to cope with two Kims?”