FASHION: These boots are made for walking…not sure about the shoes, though

If Cinderella was for real, I think we can figure what footwear her sisters would be sporting while a prince was trying to fit Cinders into a slipper. Yes, they’d be Ugglies.

Ugg boots are shapeless and shameless, the very antithesis of sexy. And they are enormously popular. The Ugg business is literally a billion-pound industry. Its products perhaps first came to prominence while being worn by Pamela Anderson on Baywatch as long ago as 1994. Yep, the ideal sartorial accompaniment to a red swimsuit. (Maybe that’s when the slang term ‘slag wellies’ was coined?)

They come in various shapes and sizes, in different colours, even blinged-up if you fancy. They are not cheap – into three figures a throw – but they are (so I’m told) exceedingly comfortable. Which explains everything. Uggs may not look so great but wearing them means putting your feet into something warm and beautiful. They are the footwear (not football) equivalent of John Motson’s sheepskin coat. 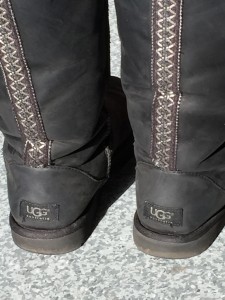 The backside of a pair of Uggs

What is it with women and shoes? Someone once told me it’s because most women hate looking at themselves in the mirror and when you’re trying on shoes, unlike other clothing, you don’t have to do that. Whatever, it’s not difficult to understand the allure of matching colours of shoes with colours of dresses and other items of clothing, and to get the point that they are rather nice to handle – sort of like dolls for adults. Maybe they are what drives some men to transvestism?

But back to the Uggs. Or rather, to their opposites. Stilettos. At the Cannes Film Festival last May, the topic of high heels became a hot issue when some women were turned away from the red carpet for not wearing them. They were wearing flats! This wasn’t so much a storm in a D-cup as a scandal of sandals. One rejectee, Samantha Baines, said: “I’d heard that you were meant to wear high heels. But the invitation just said ‘formal dress’ so I thought I’d see how it goes. So I put on my dress and my red lippy – because it’s very important to match the carpet when you’re that much closer to it because you’re not wearing heels!” I’m glad she said that rather than me.

It’s unfortunate enough that there are perpetual noises emanating from the film industry about the lack of off-camera opportunities for women and lesser pay for actresses versus actors (I think Angelina Jolie is exempt from both those points) without this sort of stuff occurring. And the flak was not diverted by those who pointed out that there’s a dress code for men, too – black tie. No, the preposterous element of women being made to wear heels is that men don’t understand how uncomfortable they are. I mean, women would never choose to wear heels if they didn’t have to; would never want to make themselves and their clothing look and feel more elegant. That’s why there’s no money in high (-heeled) fashion. It’s why Jimmy Choo is going to be rebranded as Jimmy Who.

Indeed. And my next mode of transport will be a pumpkin.

135 thoughts on “FASHION: These boots are made for walking…not sure about the shoes, though”