FASHION: They can be Hiro’s…no, actually they are – plus Jerry and Rupert!

OK, apologies for the David Bowie tribute headline, but Hiro – the Japanese/American photographer renowned for his idiosyncratic fashion shoots – has a fabulous monochrome photo (sorry, I’m advised that strictly it’s a pigment print mounted to dibond) of the Rolling Stones on display in London, so a rock’n’roll reference is not out of place here. In fact, that image is the first one to strike you as you enter this intimate retrospective at Hamiltons Gallery in Mayfair (13, Carlos Place, London W1). Mick Jagger is to the fore in it, as you’d expect.

Hiro arrived in America from the orient in 1954. Establishing a reputation for the imagination of his surrealist art, by 1982 the magazine American Photographer was asking ‘Is this man America’s greatest photographer?’ Obviously it’s a matter of personal choice whether one prefers the rhinestone necklace on a tattooed back (as depicted by the image on the home page) or the James Galanos dresses, from his 1960s work for Harper’s Bazaar, seen below. 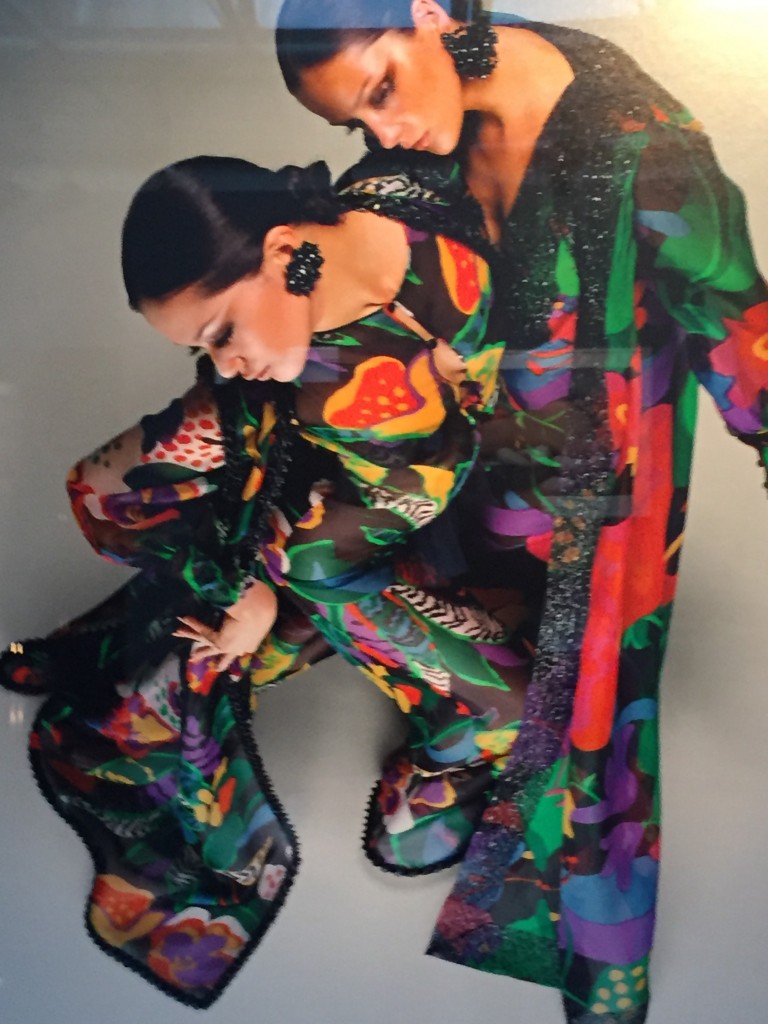 Mark Holborn, a photographic expert on the use of mise-en-scene, wrote of Hiro: “When he takes the whole theatre of fashion to the beach, he returns with a metaphysical contemplation.” Leaving aside the sentence’s potential credentials for inclusion in Private Eye’s ‘Pseuds Corner’, it is therefore perhaps not surprising that also depicted in this exhibition is a model lying on a beach. In this case, lounging around in Saint Martin in the French West Indies in 1975, is Jerry Hall, apparently exhaling cigarette smoke. It was that year she first came to public attention, as the cover girl for Siren, the fifth Roxy Music album. Jerry, now 59, was then going out with the band’s lead singer, Bryan Ferry, and later got married (or didn’t, depending on whose version you believe of the wedding vows they exchanged in Bali), to the aforesaid Mr Jagger.

Jerry is now engaged to media mogul Rupert Murdoch, 25 years her senior (i.e. around Hiro’s age), who assuredly has enough dosh to purchase all eight of the limited-edition Jerrys if he so wished. The gallery is evidently taken by the work; it forms the cover image for the sales brochure. But back to the frivolity. As the most recent issue of…er Private Eye characterised matters: “Will you make me the happiest man in the world,” Rupert asked of ‘Leggy’, “and sign a pre-nup?”

The exhibition goes on until March 12. As for Mr Murdoch, I have no clue.

56 thoughts on “FASHION: They can be Hiro’s…no, actually they are – plus Jerry and Rupert!”