FASHION: Trendy courier T-shirts and unbuyable bags – you couldn’t make it up

The groovy French fashion brand Vetements introduced a DHL T-shirt at a Paris catwalk show last autumn. When it became available to buy earlier this year, it sold out faster…well, faster than the company might deliver you a parcel. (Note to lawyers: that was a joke.) This even though said T-shirt cost £185. Those frustrated at being thwarted amid this extraordinary frenzy opted for the last resort, which perhaps should have been the first resort. A very similar T-shirt was available from the DHL website for £4.50. This, of course, is the version its employees might wear. Only in fashion, hey? – the real thing costs around a twentieth of the copy. The difference between the two T-shirts is that the designer line has a stripe that goes round the back of the shirt. The DHL couriers therefore have to forego this, although quite why it’s worth an extra 180 quid of a non-employee’s money for that specific appearance is hard to say. (If you were wearing a jacket, no one could notice.)

What does this say about us, about some elements of fashion society? That its devotees are morons? Or that this is in fact sartorial irony, making a mockery of capitalist branding? If the latter, I think we can figure out whom the laugh is on. As journalist Lauren Cochrane wrote in The Guardian: “Fake, parody, homage or original? Those distinctions are so over.” I think all one can say with some confidence is that the DVL T-shirt, in either guise, looks better than the grunge Kanye West designs, which mostly makes Guantanamo Bay non-chic seem desirable. 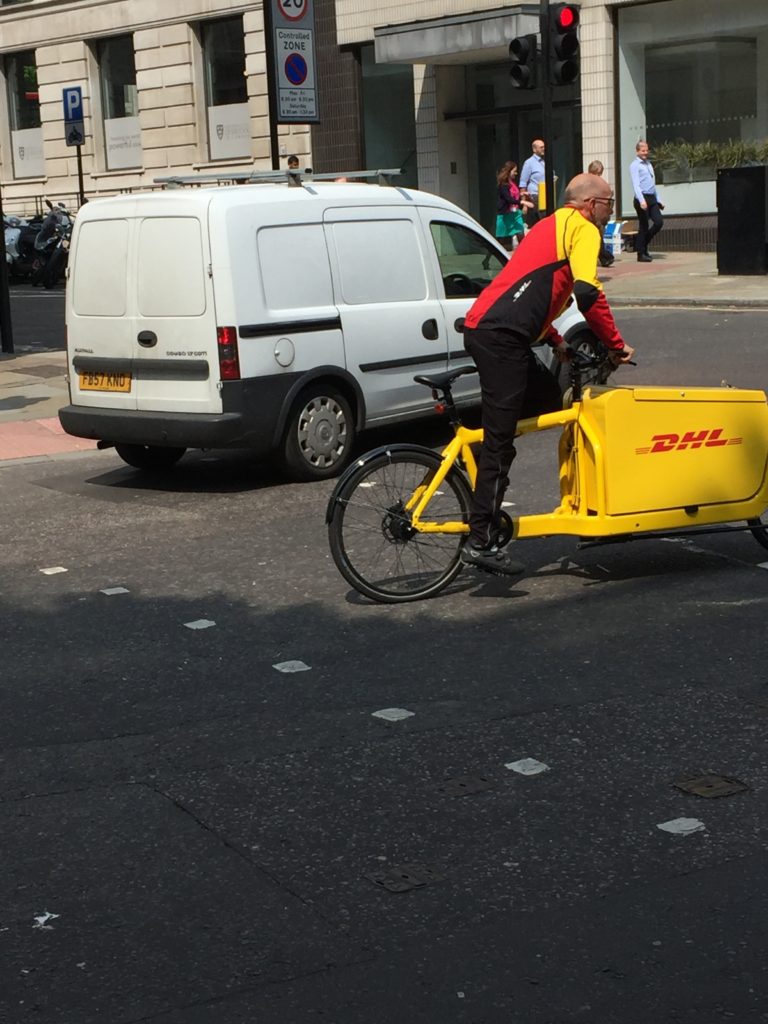 Forgot about the T-shirt for a moment: DHL Guy and White Van Man prepare to contest a T-junction

OK, so that’s all too ridiculous. But maybe not compared to this. A routine Birkin handbag by Hermes costs around £6,000. So only for the wealthy, obviously. But hold your horses; it’s not that easy. It’s apparently the accessory that money can’t buy, at least if it were my money, for example. In the Daily Mail, Zoe Brennan quoted one ‘expert’ as saying: “Your average woman can’t just walk into Hermes and buy one. You’d have to have a long-standing relationship with one of their sales associates.” (In case I might get accused of larceny, I’ve cautiously chosen a photo of a humble Hermes tie for the home page.)

In Greek mythology, Hermes was the messenger of the Gods. In Bruton Street couture, the evident message is ‘not for the sods’. Apparently named after Jane Birkin, the notorious co-singer with Serge Gainsbourg of the banned (for being too hot/explicit) song Je t’aime…moi non plus in 1969, the bag comes in a range of colours and is made of anything from denim to crocodile. Leather and ostrich are among the in-betweens. The bags cost up to £35,000, which is not only a lot of money, it’s useless information unless you’re an actress or a super-model, in which case you won’t care about the price.

Oh, and if you’re tempted to buy one on eBay, the odds are it will be a fake.

80 thoughts on “FASHION: Trendy courier T-shirts and unbuyable bags – you couldn’t make it up”