Low times for the high street

I remember a cartoon in an old issue of Private Eye, probably about 10 years ago. It depicted two scenarios: on the left was ‘Then’, on the right was ‘Now’. In the former, one of the two characters was saying to the other: “Oh, look. That shop has got a website.” In the latter, he is saying: “Oh, look. That website has got a shop.” Already, we’ve got past that point. Last week, Boohoo paid £25.2 million for the websites, stock and intellectual property rights of Burton, Wallis and Dorothy Perkins. The 214 stores (a Dorothy Perkins one is shown on the home page) were not included. Because they’re not wanted. The previous month Boohoo had bought Debenhams on the same basis. Likewise the acquisition by Asos of Miss Selfridge and Topshop. It’s all change in the world of fashion, whatever level one is talking about. If even five years ago you had suggested Philip Green’s Arcadia would have been completely broken up, and that no one wanted prime-site properties in London’s Oxford Street, they (whoever ‘they’ might be) would have had you modelling a straitjacket.

But that is where we are now: in the ether rather than in the West End. It’s not as if the fashion industry hadn’t got enough on its plate. (Cue joke about people in the fashion industry never having much on their plates at all.) There’s Brexit as well. The UK fashion industry is worth around £35 billion and hundreds of leaders within it have written to the prime minister saying that the extra tariffs and duties that now have to be paid when exporting to the European Union could “decimate” businesses in the UK. Some may shift production to the EU, costing jobs in the UK. The situation is not unlike that currently being protested by musicians, in their case to do with visas and red tape, which led Elton John in The Guardian last Monday to say “if Brexit prevents many new musicians from touring, the only artists who are going to have any meaningful kind of live career are big, august, mainstream artists like me. And, trust me, I don’t want that any more than you do”. 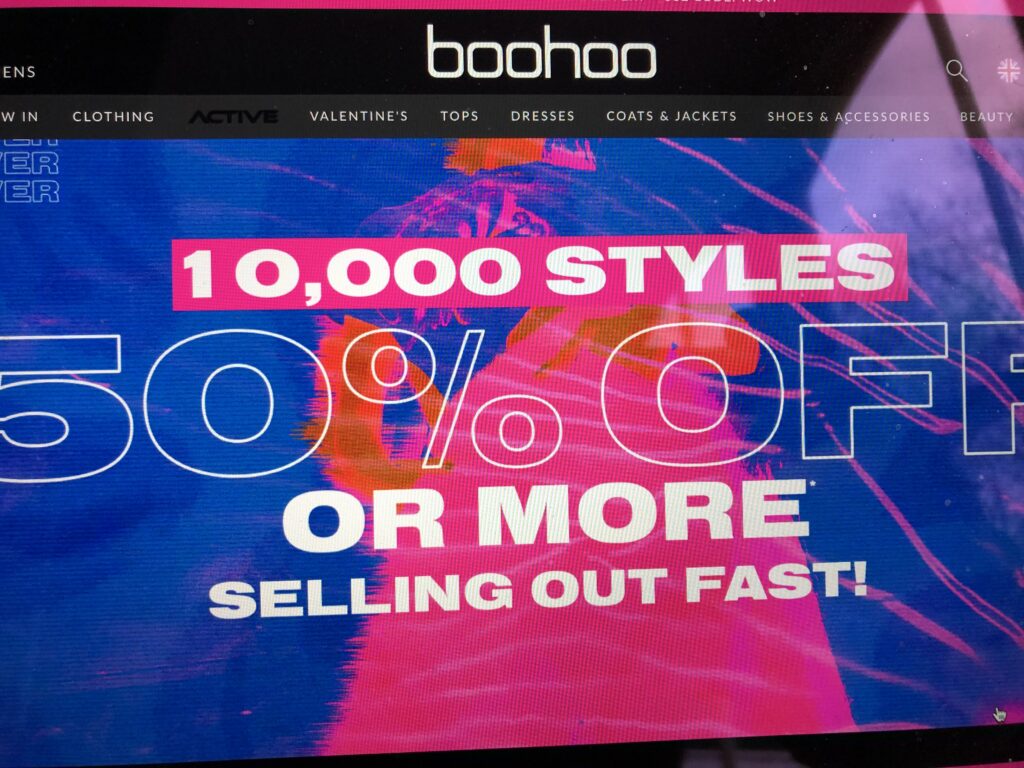 After its recent acquisitions, Boohoo will keep about 250 of the staff, leaving some 2200 jobs in jeopardy

I have not yet mentioned the issues arising from the pandemic, which has at the top end closed catwalks and boutiques and way further down the scale has led to increasing evidence of fashion’s overproduction based on cheap labour; nor discussed the negative effect on the environment caused by such practices. For now, we’ll just leave all that out there.

So, yes, there is no doubt that internet shopping is presently the craze. Indeed, it’s the only show in town. But what when this ends; when covid has cleared off or is at least under control? It is surely likely that boutiques will re-emerge and thrive, and in any case I suspect people will want the physical pleasure of going into shops and browsing through clothes rather than from hereon always settling for a run-through on their laptop followed by click and deliver. In Elton John’s business, they said that CDs would definitively end the demand for vinyl. Look how that prediction turned out…