A little bit of sleaze in the Oxford cop shop

The first book in the Inspector Morse series by Colin Dexter was Last Bus to Woodstock, published in 1975. The final one was The Remorseful Day, published in 1999. In a way, it’s appropriate it was the 13th. Towards the end of it, Morse dies.

Predominantly set in Oxford, the ‘dreaming spires’ of which look particularly beautiful in the TV adaptation, the chief characters are Detective Inspector Morse (his first name is Endeavour, which he abhors) and Detective Sergeant Robert Lewis. I saw most of the TV series before having ready any of the books – there are many more TV programmes than there are books, 33 versus 13, with these stated as being based on the characters created by Dexter – and one of the features that stood out for me was that the Morse of the books is a less likeable character than the man played on television by John Thaw (see photo on the home page). He is harsher person; a bit bitter, quite ungenerous. And one who loves his smut in the News of the World. And elsewhere.

In The Dead of Jericho, for example, the fifth book but the first to be shown on TV, Morse is in a strip club, having followed a dodgy character inside. Morse watches the show. “With the palms of her hands supporting her weighty breasts, she paraded herself under the noses of several of the more proximate voyeurs  – like a maiden holding up a pair of giants bowls in a ten-pin bowling alley.” That’s just one example, of many. But with the Morse books the big deal is the ‘reveal’; frequently ingenious. 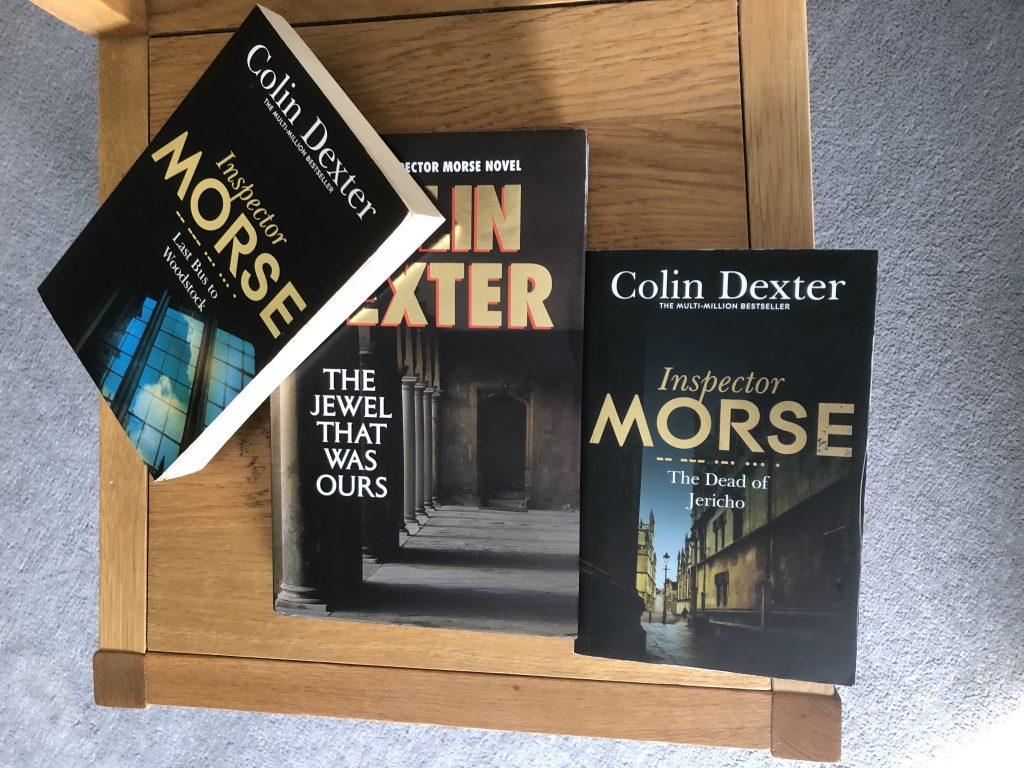 All considered, perhaps best enjoyed in a comfortable armchair than the one these books are resting on

When it comes to the solving of the case, usually a murder or two, frequently in the books Morse has confounded Lewis and entranced the reader with his comprehensive summing up of the ingenuity with which the deed was done and by whom. But there remains a problem. You know you’re only two-thirds of the way through the book, so that can’t be the explanation. And it isn’t. As Lewis ponders in The Way Through The Woods: “Often in the past Morse had similarly been six or so furlongs ahead of the field only later to find himself running on the wrong racecourse.” Having apparently solved the damnable case, but wrongly, Morse has to do it all over again. Which, of course, he does.

The TV series is not wholly faithful in its adaptations of Dexter’s fiction. For example, The Wolvercote Tongue altered its title from The Jewel That Was Ours, changed the killer and added a victim. And the TV series is not without its casual sexism, too, albeit markedly less. The screen version of Last Seen Wearing also has a different victim and a different killer – as you can tell, reading the book first is not necessarily a spoiler! The story is set around a girls’ school (featuring as one of its pupils a mid-’80s Liz Hurley). Driving in, Morse and Lewis stop briefly to watch a hockey match. Morse turns the conversation to sports skirts, the design thereof. “Somebody sat down, drew a fantasy and made a compulsory uniform,” he says. “I can never watch Wimbledon without thanking that man.” I’m not sure that either the blatant sexism nor the inherent one (Morse precluding the very notion that the skirt might have been designed by a woman) would make it to the screen these days. The 1980s feel is then exacerbated when Lewis asks: “Are we going?”, to which Morse replies: “In a minute.”

Towards the end of that tale comes one of my favourite lines in the whole series. Not for the first time, nor the last, the two coppers are in a pub, albeit very much on duty. Morse orders a pint; Lewis a soft drink. “Don’t look at me like that, Lewis,” says the senior man. “I’m thinking, and when I’m thinking I get thirsty.” Hey, Sherlock Holmes relaxed his mind with cocaine!