First, a (very) brief history lesson. In 1938, Evelyn Waugh published Scoop, a lively and evocative satire about life in Fleet Street. The newspaper in question was called the Daily Beast and its proprietor was Lord Copper. In those febrile pre-WW2 times, readers would have had no doubt that the newspaper being sent up was the Daily Express and the magnate in question was Lord Beaverbrook. (BTW, and very incidentally, the excellent BBC adaptation earlier this year of an earlier Waugh novel, Decline and Fall, featured Eva Longoria as Margot Beste-Chetwynde, the pronunciation of which is open to interpretation but on television was magnificently rendered as Mrs Beast-Cheating. Just a thought.)

There have been other fine books about Fleet Street and the old, arguably halcyon, days of the London newspaper business, Michael Frayn’s Towards the End of the Morning (1967) among them. Earlier this year saw the publication of Stephen Glover’s Splash, again highly enjoyable. The new offering from Alexander Starritt, The Beast (the cover of which is shown on the home page), is bleaker than any of these. There is a great deal of humour in it but among Starritt’s talents as a writer is that he keeps you trying to figure out where humour crosses into parody or into satire or even into the frightening bloody truth. This being a book about post-Referendum Britain, today the beast has become the Daily Mail (plus its spin-off website, BeastOnline), and the editor of The Beast, rather than its owner, is the chief inspiration for villainy dressed up as patriotism. His name is Charles Brython (as in rhymes with ‘python’), whom I think it’s (very) safe to say we are supposed to take as being a fictionalised Paul Dacre, editor of the Daily Mail. 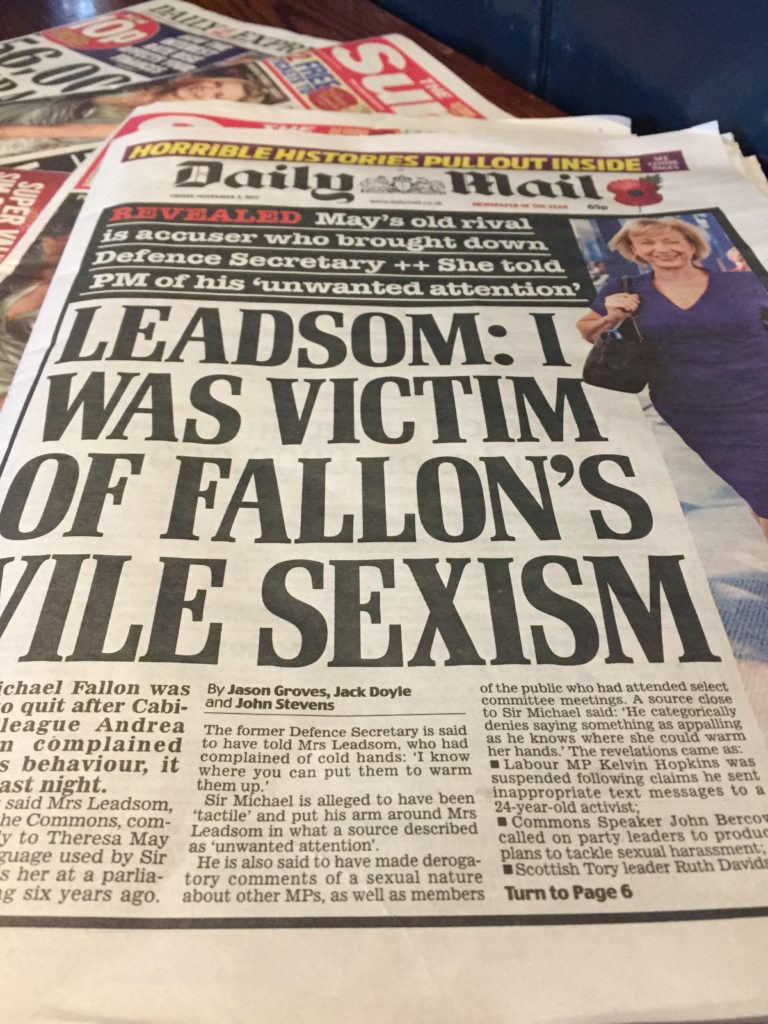 The front page of an edition of the Daily Mail: the newspaper often promotes a prurient interest in sex

According to the ‘Street of Shame’ column in Private Eye, Dacre is not chary about utilising locker-room talk if he feels the situation so demands. If he is particularly worked up about something, the unfortunate recipient of his invective might be subject to what Mail hacks apparently call (and I’m sorry but there is no polite way around this) “a double-cunting”. That is, perhaps something along there lines of “you f******  c***, which c*** university did you go to?” Starritt includes that sort of language here. (I do hope I’ve calculated the asterisk count correctly.)

And the plot? Jeremy Underwood returns to the office after a short holiday in Ireland to find his place on the subs’ desk has been taken by a young woman. He can’t believe he’s been demoted. “Lauren?” he says. “But she’s about eight years old.” His bad day is about to get worse. He mentions a couple of burqa-clad women he’s seen outside the paper’s Kensington office. This information gets to the news desk and soon he is being questioned – for example, how could he be sure they were women? Within a couple of hours, at least to the denizens of the editorial floors of The Beast, they are male terrorists. Things get out of control from there. More than once. Very badly. In the pursuit of chasing the non-story, innocent lives are lost, but all in a good cause, hey? Like I said, the way Starritt takes something funny or preposterous and then makes one realise that this sort of stuff really might happen is…well, frightening.

He is very good on the role of sub-editors and I’m sure he had a lot of fun imagining some of the material, such as BeastOnline headlines ‘Yew were always on my mind: the tree that looks like Elvis’ and ‘Is overpopulated Britain on the brink of cannibalism?’ (Don’t tell me there’s no way stories like that could ever appear on MailOnline.) But there’s a (very) serious story beneath the roller-coaster ride here, and it’s about a journey to hell.

94 thoughts on “FICTION: A beastly profession”