FICTION: Ballard’s masterful touch in his recurring analysis of super-dystopia

The most famous work of J.G. Ballard, who died aged 78 in 2009, is very possibly Empire of the Sun, a vividly autobiographical novel set in the Far East. It was successfully made into a film, as was Crash, his somewhat-weird sex-based novel about the improbable arousal implications of serious car accidents. Recently another Ballard book has been adapted for to the silver screen: High-Rise, starring the now ubiquitous Tom Hiddleston of The Night Manager fame.

However, what I find most fascinating about Ballard’s work is his continual returning to the pessimistic study of humankind when seemingly the protagonists have pretty much everything they could want; how financial comfort and luxurious surroundings will invariably lead to a dystopian existence. That view informs the story of High-Rise (published in 1975) and also that of  Cocaine Nights (1996), set on the Costa del Sol; Super-Cannes (2000); Millennium People (2003), based in Chelsea; and Kingdom Come (2006), featuring a high-end new town close to the M25. I’m looking at two of these and the connections between them.

The opening sentence of High-Rise is a cracker: “Later, as he sat on his balcony eating the dog, Dr Robert Laing reflected on the unusual events that had taken place within this huge apartment building during the previous three months.” With Ballard, it’s not all downhill from there. Instead it’s an uphill climb, warfare breaking out as the inhabitants of the lower floors aspire to climb the ladder of social status by trying to ascend the building, this notably in the person of Richard Wilder, literally an upwardly mobile film producer. Death, rape and random assaults occur as the citizens of this state-of-the-art premises engage in a nocturnal state of war. The animal that provides Laing’s dog’s dinner is not the only canine fatality. It’s a book of sparse dialogue but great tension and surprises which ends with the doctor contemplating the residents of a newer high-rise opposite. “Laing watched them contentedly, ready to welcome them to their new world.” 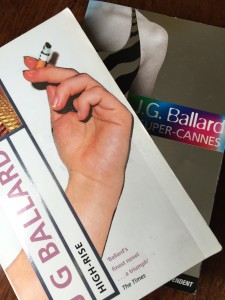 A quarter of a century on came Super-Cannes, with another non-essential hyphen (semi-pun intended; and again) in the title. Here we’re four sentences in before Ballard has his chief character, Paul Sinclair (this one is written in the first person), say: “Only when I learned to admire this flawed and dangerous man was I able to think of killing him.”

This man is Dr Wilder Penrose, a psychiatrist at Eden-Olympia (there we go again!), which is not so loosely based on the hyphen-free Sophia Antipolis, a huge technology site located to the northwest of Antibes on the French Riviera. In this apparently appealing environment we gradually learn of the demons that had caused one of Sinclair’s predecessors, David Greenwood, to go on a shooting rampage. In fact, the locals get their kicks by beating up poor migrants – it’s called a ratissage; “just an evening workout for one of our self-help groups” Sinclair is informed – and the truth is the place is more hell than eden. As the murders mount up Sinclair realises what he must do, and the book concludes with the sentence: “I drove on, thinking of Jane [his wife] and Frances Baring [his lover] and Wilder Penrose, ready to finish the task that David Greenwood had begun.” I think that’s very reminiscent of High-Rise.

Some may say that Ballard was essentially reworking the same story in different locations. Indeed, but he finds different ways to study similar phenomena, offering different conclusions to similar circumstances, even if it could never be said that things turn out particularly well. In any case, he’s a wonderful writer. With Ballard, you’re never bored. As in never-ever bored.