FICTION: Life after Larsson…but have we now had a surfeit of Salander?

Stieg Larsson’s first book in his Millennium trilogy was The Girl with the Dragon Tattoo, published in 2005. (A photo of the cover is on the home page). Its subsequent international success, which has seen it sell over 20 million copies, has been extraordinary. It spawned two films of the same title: a Swedish version, released in 2009, starring Michael Nyqvist and Noomi Rapace as the chief protagonists, Mikael Blomkvist and Lisbeth Salander, was followed a couple of years later by a Hollywood remake featuring Daniel Craig and Rooney Mara. Two more books followed, The Girl Who Played with Fire (2006) and The Girl Who Kicked the Hornets’ Nest (2007). But there was something sad and unsatisfying about the whole business. Larsson had died aged 50 in 2004. He never knew his first book had been published even though he’d written two more as well.

It got worse. His long-time girlfriend, Eva Gabrielsson, was just that: his girlfriend. She was not his wife. Larsson may have been a gifted author and journalist but he was a somewhat disorganised man. He had made no Will so his estate passed into the control of his family, from whom he was estranged. Gabrielsson barely benefited from the book’s success and she was powerless to stop the resurrection of the series, which she wished to do, in 2015. It resumed with The Girl in the Spider’s Web, by another Swedish writer, David Lagercrantz. A follow-up, The Girl Who Takes an Eye for an Eye, came out last year. 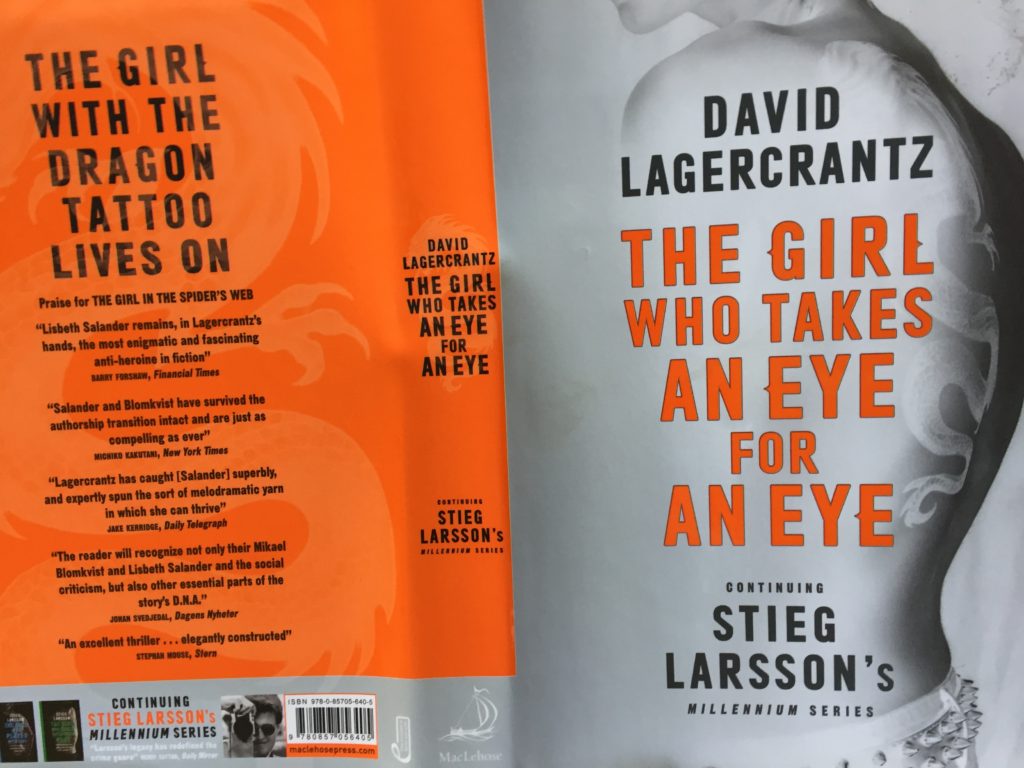 The fifth book in the Blomkvist/Salander series came out last year: might it be best to leave it at that?

(Lagercrantz’s other works include the co-writing of the autobiography of the Manchester United and Sweden striker, Zlatan Ibrahimovich, and a novel entitled Fall of Man in Wilmslow – which is a smart Cheshire town in which Zlatan may well have spent quite a bit of time in recent months, although the book is in fact about Alan Turing, the WW2 computer genius.)

The underlying plot of Dragon is of the locked-room genre: how could Harriet Vanger have vanished?…who could have kidnapped/killed her? While endeavouring to sort that out, Blomkvist, who is a journalist, and Salander, an ultra-resourceful hacker, have a ruthless businessman, Hans-Erik Wennerstrom, to deal with, as well as the members of the Vanger family who are around. They join forces to tackle both issues. There’s a lot going on. I won’t spoil the plot but I think it’s a terrific book. But is now the time to put a stop to the series? No further ones have been trailed and, given the torpor that generally hangs over the last one, it would probably be best if the series ended here. Larsson’s books were driven with tremendous pace and verve. Stuff happened, pretty much constantly. Eye for an Eye reads like Lagercrantz wrote it because he had a contract to fulfil.

The translated title of the first book in Swedish was Men Who Hate Women, which was a theme recurringly addressed, not least via the fact that Salander had been raped by her guardian. The UK publisher, Quercus, changed the title to Dragon, but given the fall-out from the Harvey Weinstein accusations and several other sordid stories in recent times, you’d have to admit that Larsson’s original title has today a particular sense of relevance about it.

100 thoughts on “FICTION: Life after Larsson…but have we now had a surfeit of Salander?”