The author of The Book of Mirrors , E. O. Chirovici, has had a distinctly cosmopolitan upbringing, one reflected in his subsequent career. His family were of German, Hungarian and Romanian descent. He now lives in Brussels. This is his first novel written in English and it’s set in the United States. As befits someone brought up in Transylvania, it has teeth.

The story is essentially in three sections. It opens with the receipt of a manuscript by Peter Katz, a literary agent. Or rather of a partial manuscript. The author is Richard Flynn, previously a student at Princeton University who had worked there for a renowned psychology professor called Joseph Wieder. Flynn had been introduced to Wieder by the latter’s star pupil, Laura Baines, who by happenstance had become Flynn’s housemate and later his lover, this despite the desperate endeavours of her former boyfriend, Timothy Sanders, to keep them apart. During the course of helping Wieder make more logical sense of the ordering of his formidable library, Flynn had met Derek Simmons, a quondam handyman for Wieder to whom he has long been indebted for providing the expert medical evidence that enabled him to avoid conviction for the violent murder of his wife. However, infuriatingly for Katz, the manuscript is not only incomplete, it tails off at a point shortly after Wieder has been bludgeoned to death in his home and Flynn has hinted at knowing what might have occurred without actually spilling the beans. 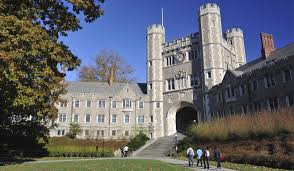 Princeton University, where story of the life and murder of Joseph Wieder makes for a great read

Cue part two. Katz hires a journalist, John Keller, to talk to the major characters to try to ascertain what happened and especially to find Flynn and the manuscript. He can do neither. Flynn is at death’s door and soon goes through it, while his partner, Danna Olsen, apparently knows nothing about any manuscript. And then inconsistencies occur which suggest, for example, that Flynn was never Baines’ lover, she never ditched Sanders, and that she and Wieder may have been in serious dispute about whose research was whose. Who to believe? This is essentially the same device as used in His Bloody Project, the Graeme Macrae Burnet Booker-shortlisted novel which I blogged about previously. The reader has been told a story and is now being asked to believe that he/she might have been sold a pup.

The final part sees the entry of Roy Freeman, the cop who investigated the original case, albeit not very well due to his fondness for booze and his marital discord. (I know, hardly original but don’t let that put you off.) He’s no longer on the force but he’s very determined to be on the case and he opens up a fascinating new lead while intriguingly revisiting an old one. As I think matters a great deal with a thriller – although this novel works at more levels than merely that – the denouement is satisfying.

Chirovici has good reason for being interested in literary agents. His manuscript was rejected several times before, as he recounts in an acknowledgement at the end, he was persuaded to persevere by the head of a small publishing house. That worked, to the extent of him now apparently being likely to make millions from this particular work.

421 thoughts on “FICTION: Reflections on a cleverly constructed whodunit/whydunit”