FICTION: The politics of power and a bit on the side

The last feature in this category was about a book called Number 11. This one is about No. 10 – more specifically, the soon-to-be inhabitants of it in the mid 1990s and the self-same folk shortly after they have taken occupation. It’s the Blairs in (very) thinly veiled disguise.

The cover jacket of Holly Lester makes clear from the outset what Andrew Rosenheim is about. It carries a blurb from the Sunday Times hailing the work as ‘The British Primary Colors’, which itself was a novel about an American presidential campaign, with Jack Stanton being Bill Clinton in all but name. The cover of that book had the author styled ‘Anonymous’. (He was later revealed to be a well-known columnist called Joe Klein.) It carried the usual up-front disclaimer – “this is a work of fiction…none of the characters are real…none of these events ever happened”. Yeah, sure – pull the other one. 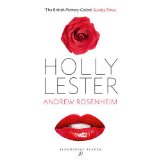 Kiss and tell? More like screw and keep schtum

To his credit, Rosenheim not only names himself but doesn’t bother with any of that bollocks. Of course, I say ‘to his credit’, but maybe that should read ‘to his stupidity’. After all, Cherie Blair is a lawyer! And to say this a story chiefly about her and her husband in the style of a roman-a-clef would be as transparent as saying Roman Abramovich has a significant stake in Chelsea Football Club.

Holly is Cherie and Harry Lester is Tony. The other central character is James Billings (I have no clue; presumably genuinely fictional) who embarks on a passionate affair with Holly, at least when he can be fitted into her diary as well as into her bed or elsewhere if needs must. He is a somewhat struggling art dealer and they meet when Holly arrives at his gallery to buy a painting. She wastes no time in seducing him. I know: the word ‘improbable’ does come to mind.

But it is an entertaining yarn – “a satirical romp” as the blurb has it – and as it as says, “for those who remember the early halcyon days of New Labour, this novel will bring back memories”. Peter Mandelson is splendidly depicted as Alan Trachtenberg, a Machiavellian and mendacious character to whom truth is a total stranger and who eventually gets shafted by Holly for compromising her relationship with James. (I apologise if I’ve now ruined this for you.) All your old favourites are here – the Millennium Dome, recast as a different grandiose project; the dodgy residence; the preposterous press spokesman; the vacuous rhetoric which enchanted a nation.

Rosenheim has not been wholly reckless, legal-wise. The book was written contemporaneously with the Blairs time in Downing Street but publication was delayed in case of action by our learned friends. The novel was slated in the Times Literary Supplement by Peter Stothard, not least for the “tasteless” sex scenes. Private Eye – surely egregiously? – suggested this might have been because Stothard was a huge Blair fan and was indeed knighted under the latter’s regime. Who am I to say, although you might feel inclined to regard such criticism as being a reason to read it.