FICTION: Thrilling you, yes, but it’s not often very softly

The Nicci French oeuvre runs to 18 psychological thrillers, beginning with The Memory Game in 1997 and most recently including Saturday Requiem, published last month. The former book described the author thus: “Nicci French is a journalist and lives in London. This is her first novel.” Subsequently it became known that this was less than accurate – albeit without the fanfare of J.K. Rowling being outed as Robert Galbraith. Nicci French was in fact two journalists, Nicci Gerrard and Sean French, a husband-and-wife team who now live in Suffolk. (They are pictured on the home page.)

I re-read The Memory Game recently. I think it’s terrific. It is to their credit that the subsequent 11 offerings managed to maintain that sort of standard. The second book, The Safe House, was made into a film, as was Killing Me Softly. I didn’t see the latter, which was mostly trashed by cinema critics, but the book is scarily (at times very much so) good. Two others made it to a small-screen adaptation. Beneath The Skin is in part told from the perspective of a murderee (an idea perhaps nicked from Martin Amis’s London Fields?) and the plot twists are handled expertly. What To Do When Someone Dies also appeared on television (under the title Without You). The brief story-line is indicative of the genre: “It’s devastating to hear that your husband has died in a car accident. But to learn that he died with a mystery woman as his passenger is torment.” The scenarios are classic thriller material – accidents aren’t accidents, you can’t be sure who is or isn’t a reliable narrator, have these people really never met before? – and French invariably handles both characters and story with aplomb. 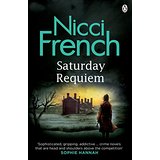 The cover of the most recent Nicci French thriller

The first 12 books, concluding with Complicit (2009), were stand-alone titles; there’s no interaction between them. That changed with Blue Monday, the first of six (to date) novels featuring the psychotherapist Frieda Klein, each one being named after successive days of the week. Presumably the last one – Sunday Roast? – will be out next summer.

A cast of characters here recur throughout the series, not only Klein herself but Josef, her Ukrainian builder; Reuben, a former colleague; Sasha, her long-time friend; Karlsson, a rather renegade cop; and more. There is also – to me at least – a rather annoyingly recurring protagonist who one presumes will either improbably prevail or be terminally thwarted in the next (final?) book.

Whether it be the earlier works or the Klein collection, French generally gets the balance right. The stories are suspenseful and surprising, and when the narrative moves off in a direction the reader had not foreseen, it’s never to the extent that the twist seems too illogical an occurrence. There is no requirement for an excessive suspension of disbelief – even if at times these can be the sort of books that, if they were a TV programme, you might want to watch from behind the sofa. But then one can hardly read a novel with a cushion in front of your face.

48 thoughts on “FICTION: Thrilling you, yes, but it’s not often very softly”