FICTION: Very far from being a French idyll

This book may be the most inaptly named of the year. Serotonin is a chemical with a wide range of functions in the body; it is sometimes called the happy drug because it contributes to wellbeing. But this is emphatically not a happy story. In his eighth work of fiction, Michel Houellebecq lives up to his acquired reputation as le enfant terrible of French literature in two ways – it might be that the subject that is discussed the most, either directly or discursively, is techniques of oral sex (we’ll leave the dogs out of things), and at times the author doesn’t seem too bothered about driving the narrative of his own book. With hindsight, it is not easy to see what the point of the last 70-odd pages is; or at least you figure they could have been cut to 25.

Mostly set in Paris and Normandy, Serotonin is not for the straight-laced or for lovers of the European Union. At a time when Brexit is off the charts as a news story in the UK, Houellebecq’s book lets the European Union have it with both barrels from a French perspective (to be strictly accurate, with a 223-calibre Schmeisser) and the sense of societal unease in France that has been displayed in recent times by the arrival of the gilets jaunes protesters was foreshadowed by the agricultural protests depicted in this book, which was published before the real troubles began in earnest. Deservedly or not, because of this Houellebecq has been depicted in some quarters as something of a political savant. 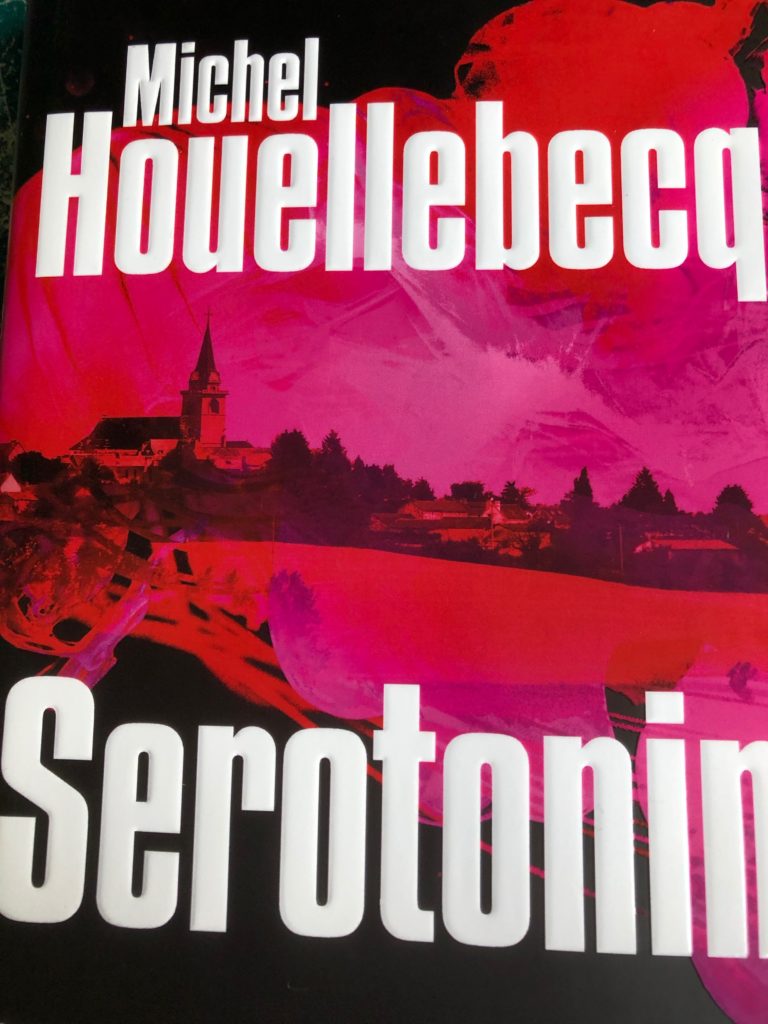 The central character is Florent-Claude Labrouste, an agricultural civil servant who was left a substantial sum of money by his father. The first sense of nihilism comes early. He nearly drives his car off a road and his reaction is not relief; it’s “I had just failed in my second attempt at liberation.” Later he reflects that “society was a machine for destroying love”. It would be true to say he is essentially selfish (“I drove a diesel 4×4 – I mightn’t have done much good in my life, but at least I contributed to the destruction of the planet”), which played a significant part in the series of failed ‘romantic’ relationships which he details. The drug he takes to combat his melancholic loneliness is Captorix, effectively prescribed serotonin, which has the side effect of reducing his libido – which may have been good news for the two pretty young girls who seek his help with the tyres of their VW Beetle (the car depicted on the home page).

The book has, of course, been translated from the French, although I think that does not excuse the cock-ups over the Pink Floyd album cover or the line-up of Deep Purple, British rock bands of those halcyon days being a topic of conversation between Labrouste and his old friend, the ill-fated Aymeric.

Just before the rioting kicks off, Labrouste goes for a stroll. “My walk on the cliffs was unfortunately a failure,” he tells us. “And yet never had the light been so beautiful, never had the air been so fresh and invigorating, never had the green of the meadows been so intense, never had the reflection of the sun on the wavelets of the almost flat ocean been so enchanting; neither, I think, had I ever been so unhappy.” Says it all, really.