Morphing from JKR into Robert Galbraith

In a fiction blog in November 2015, I wrote about J. K. Rowling, creator of Harry Potter. Since writing the seven Potter books (ostensibly for kids!) she has published five further books under the pseudonym of Robert Galbraith. These are, as you will probably know, about the private investigator, Cormoran Strike, and his female sidekick, Robin Ellacott. You may have seen the BBC adaptations of the first three – The Cuckoo’s Calling, The Silkworm and Career of Evil. The books came out in successive years from 2013. Since then there have been two more: Lethal White (2018) and Troubled Blood (2020). The cover of the latter is shown on the home page.

There is one vaguely interesting (if wholly pointless!?) comparison to be made between the Potter and Strike series in the Rowling/Galbraith canon. The Potter books, in order, ran to the following number of pages: 223, 251, 317, 636, 766, 607, 607. For Strike it goes 449, 455, 487, 647, 927. Yes – 927! She starts off comparatively low, when it comes to the page count, before apparently peaking at book No. 5. I can’t think the next Strike book will get into four figures in pagination terms. Whether there will end up being more Strikes than Potters is something only she knows for now. And maybe she doesn’t. As I wrote last time, given the fortune she had already made from the Potter books and consequent films before she embarked on anything to do with Strike, she must really enjoy doing it. 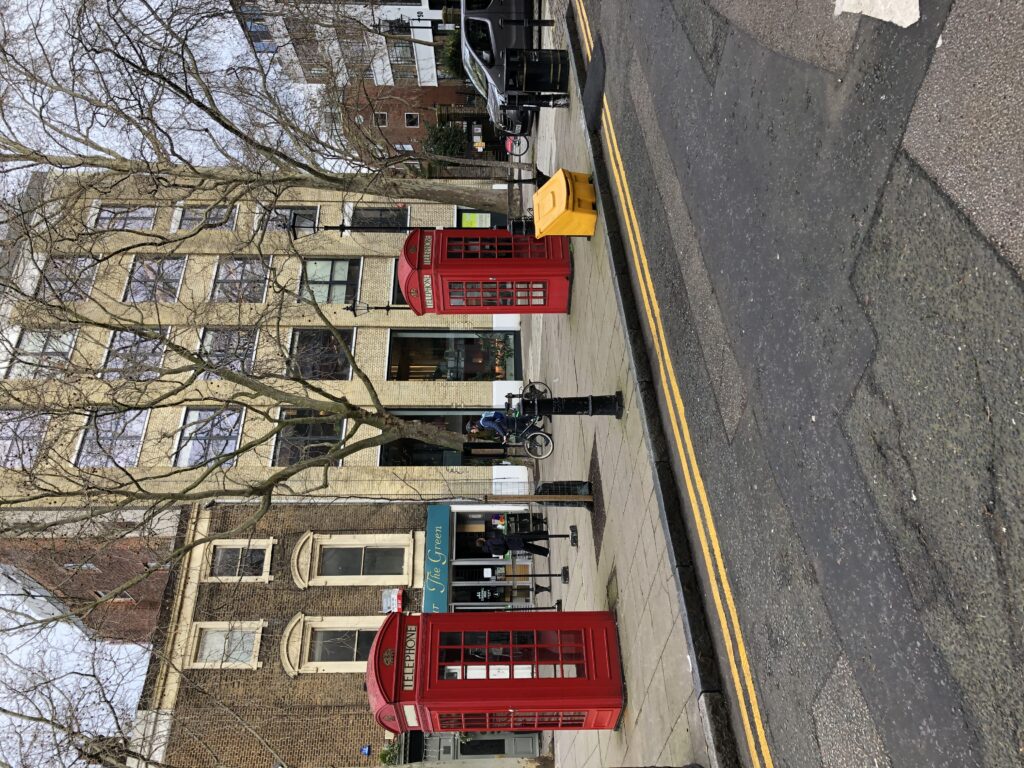 “Two telephone boxes stood in the middle”…Clerkenwell Green, setting for a scene in Troubled Blood…

Whereas each chapter of Career of Evil is headed by a song from the Blue Oyster Cult’s oeuvre, Lethal White goes for a doom-laden Henrik Ibsen (aren’t all of his doom-laden?) play, Rosmersholm, and Troubled Blood has Edmund Spenser’s The Faerie Queene. With all the books, which are hugely enjoyable as well as simply huge in some cases, there is on occasion a sense that Rowling cannot be edited: that is, there’s no one who’s going to say “don’t you think this bit goes on too long?” Also, Strike is a moderately keen Arsenal fan, and she’ll have him watching a match on the TV at 3 o’clock on a Saturday afternoon. (This all being pre-covid.) That is, she knows that the Premier League is on Sky but nobody has the balls to say to her “it’s never on the telly at that time”. And while Strike is unquestionably the star character, one cannot but wonder whether the author sees at least a little bit of Robin in herself?

There is an enormously suppressed sexual chemistry between the two leads. Robin has by the latter book been married and divorced from the deadly dull Matthew, while Strike’s life is repeatedly put in turmoil by the (he says) unwanted intrusions into it by Charlotte, his impossibly glamorous ex. One cannot but think Robin and he will eventually end up together, although if that did happen it would surely also signal the end of the series. But perhaps it won’t be that way. Intriguing though the plots are, the books are fundamentally mostly about the dynamic between Strike and Robin. In some respects, Rowling/Galbraith has created a modern-day Holmes/Watson.