The three ages of Jack McEvoy

Michael Connolly is an American crime writer who lives in Los Angeles, where nearly all of his books are set. There are a fair few of them, too: 34 in all. In the majority the chief character is a police officer called Harry Bosch – in fact, latterly a retired police officer because, as with Ian Rankin’s John Rebus, the protagonist has aged over the years (unlike, say, the late P.D. James with Adam Dalgliesh, who time-wise remained the same). Some of the exceptions to the Bosch oeuvre are quite notable. Connelly’s 2005 novel The Lincoln Lawyer was made into film starring Matthew McConaughey; prior to that, Blood Works, published in 1998, had Clint Eastwood in the lead role. (The plot in the latter is especially ingenious.)

Book No. 34 is called Fair Warning. It was published a few weeks ago. The ‘hero’ is a journalist called Jack McEvoy, making his third appearance in Connelly’s work, following in the wake of  The Poet in 1996 and The Scarecrow in 2009. From the early mobile phone era to modern technology, Connelly has kept on top of his game and his readers on the edge of their seats. 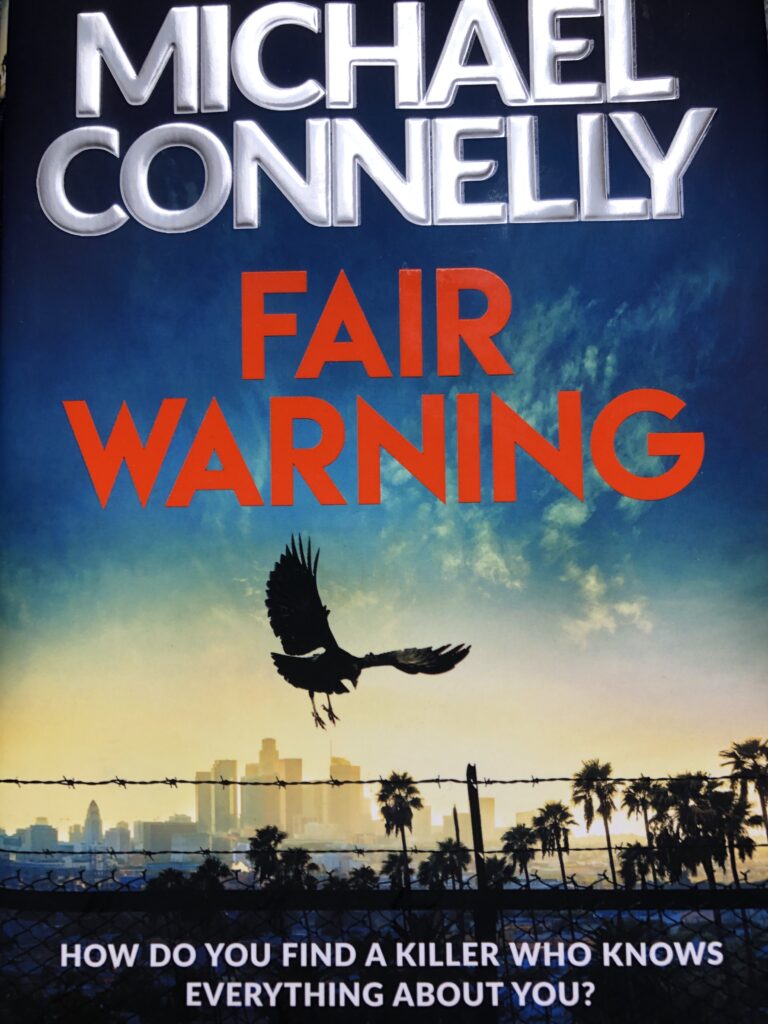 The blurb captures the main premise: how much evil can be perpetrated by bad people with sharp minds

In The Poet, McEvoy is a Denver-based crime reporter whose brother, a cop, has shockingly committed suicide. Or has he? McEvoy thinks it is so out of character that he tries to find out what the police might have missed, a scenario not uncommon to detective fiction. As you can probably guess, Jack’s hunch is correct. What you would find hard to guess is the multiple levels of intrigue contained within the book’s pages, some of which are linked to the emotional relationship McEvoy establishes with an FBI operative called Rachel Walling. The denouement is diabolically clever.

An evil guy called Wesley Carver is The Scarecrow, more formally the “chief threat officer” of an organisation called Western Data which zealously guards information belonging to client companies but which internally has more than one bad apple using this information to stalk and kill. McEvoy gets entangled with them while dealing with his last case before being ‘let go’ by the Los Angeles Times in its latest round of budget cuts. What starts off as the possible framing of a black teenager for murder ends up as a high-tech investigation in which Rachel returns both to help Jack and to save his life.

So to Fair Warning. Jack is still a journo in LA, now working for a website called…er, FairWarning. He’s still stalling over things re Walling, who is no longer with the FBI. One evening he gets a visit from the LAPD. A woman he once went on a date with a year ago has been murdered in a specifically horrible manner. On the basis of the date, he is a potential suspect. Needless to say, McEvoy cannot resist the temptation to get involved in the process of clearing his own name. Needless to say, this does not go smoothly. But it does open one’s eyes as to how personal information, freely provided, can rebound back against you if it gets into unscrupulous hands. Connelly turns 64 next week but he handles the issues surrounding social media and modern technical phenomena with the rigour and vigour of a millennial. During an era when its seems Facebook may be the single biggest influencer in deciding the outcomes of democratic elections, this may be a police-themed thriller but it its also a novel of its time.