This blog is a rather longer than most of mine. But then David Mitchell’s Utopia Avenue is rather longer than most novels, weighing in at 560 pages. (Albeit that makes it dwarfed by the new offering from J.K. Rowling/Robert Galbraith.) As I mentioned in a recent food blog, there’s a famous line attributed to Frank Zappa which says that “writing about music is like dancing about architecture”. By which I guess he meant it’s kind of pointless; words cannot convey the emotion or power of the music they are attempting to describe. From the perspective of the recipient, reading requires effort – hopefully enjoyable and worthwhile, but effort nonetheless. Listening to music need not. In an interview earlier this year, Mitchell told The Guardian: “I think most writers have a deep-seated envy of most musicians.”

The book did not attract universal admiration on review. In The Times it was “a bland, self-satisfied nostalgia-fest”. In the Sunday Times, on the other hand, it was a “richly textured novel”. In either case, it’s a late 1960s story about how an enterprising musical entrepreneur called Levon Frankland forms a band by bringing together four disparate figures: Elf Holloway on keyboards, Jasper de Zoet (lead guitar), Dean Moss (bass) and Peter ‘Griff’ Griffin (drums). (This is a different Peter Griffin to the animated one who is the lead character in Family Guy.) Early on they change their name from Way Out to Utopia Avenue. That was a smart move; you don’t want to launch a group with a moniker that means ‘exit’.

From very humble beginnings they make it to (approaching) the top. This being rock & roll, quite a lot goes wrong along the way, not all of it sex-related. Nor all of it to to do with drugs for that matter, although the section which sees Dean busted courtesy of a crooked cop in Italy is well and entertainingly told. Very good, too, is the description of the first time they hear one of their songs on the wireless, which begins…”the next song is so familiar it takes Elf a few free-falling seconds to identify it and a few more seconds to believe it. Darkroom – her chords, her Farfisa – is coming from her Hacker radio”. 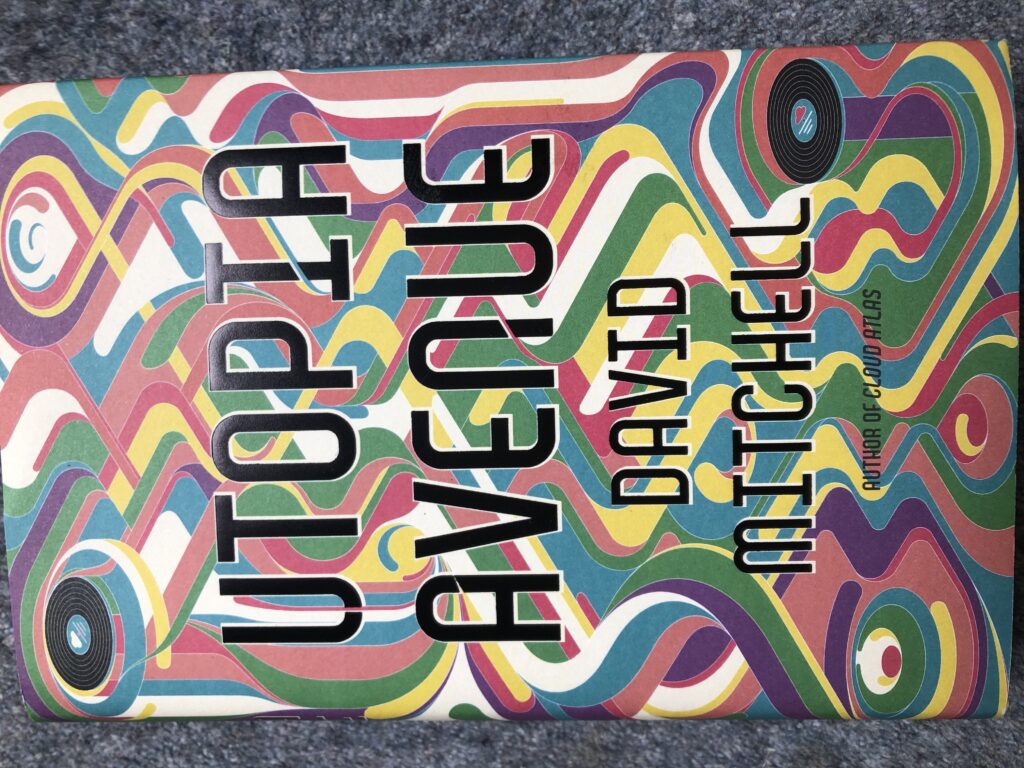 Published this summer by Hodder & Stoughton, David Mitchell’s new novel is set in the Swinging Sixties

Scenes which seem over-egged and unconvincing are such as when Dean is joshing with Jimi Hendrix, Brian Jones and Keith Moon in London and/or Elf is chatting with Leonard Cohen and Janis Joplin in LA. But while Mitchell has copped some flak for the random way he drops in real stars without usually developing them beyond a name-drop (for example, Pink Floyd and David Bowie, and Rick Wakeman in a Soho cafe as early as the first page) I think I get the point that it establishes the milieu Utopia Avenue are attempting to break into. Although he doesn’t supply any music (I mean, he couldn’t even if he wanted!), he supplies several sequences of lyrics, which are notionally written by either Elf, Dean or Jasper although never by Griff, whether that being because he’s a lowly drummer or because he’s gruff Yorkshireman – as in “Janis fookin’ Joplin” – is never clear.

I haven’t read the books in question but apparently Levon Frankland represents a completely different character in Mitchell’s The Bone Clocks while Jasper, who is a marvellous guitarist labouring with a mental state which is either somewhat psychotic or outright paranormal, is surely related to the eponymous star of The Thousand Autumns of Jacob de Zoet. Mitchell clearly has a fondness for some of his earlier creations. I wouldn’t be surprised to see Dean or Elf return for him one day.

Despite Frank Zappa’s opinion, I have enjoyed many books which have music at their centre. To cite a couple of recent works of fiction, D.J. Taylor’s Rock and Roll is Life (his fictional band, BTW, are called the Helium Kids) and Jeff Noon’s detective story Slow Motion Ghosts. Away from star-named autobiographies, such as Keith Richards’ epic Life, there are terrific books by Viv Albertine of the Slits (titled Clothes Clothes Clothes Music Music Music Boys Boys Boys) and Sick On You by Andrew Matheson of the Hollywood Brats (subtitled ‘The Greatest Band You’ve Never Heard Of’).

And there’s Stoned by Andrew Loog Oldham, early manager of the Rolling Stones. You think the sort of Soho scenarios depicted by David Mitchell would not happen in 1960s London? Think again. It’s 1963. Oldham leaves a recording studio in Great Newport Street. He is frustrated; his band cannot come up with a song for their second single. He goes for a walk. He sees two figures getting out of a taxi – “a slightly wobbly John Lennon and possibly slightly tipsy Paul McCartney”. They know Oldham and wave him over. They can tell he’s unsettled. “C’mon, Andrew, what’s up?” He tells them. They solve the problem – the three of them return to the studio and the two Beatles hand over I Wanna Be Your Man for Mick, Keith & Co to record. Sorted!

Utopia Avenue obviously don’t get to that level. Comparatively early on in the book, the band are admiringly discussing Sgt Peppers Lonely Hearts Club Band (see photo on the home page). Griff suggests it was the fact they had given up touring that allowed the Fab Four the time to create such a masterpiece, as if following that example might be a sound strategy for them. “Only the Beatles can get away with not touring,” says Levon. “Nobody else. Not even the Stones. Managerial footnote.” In fact, Mitchell’s descriptions of Utopia Avenue’s gigs provide some of the highlights of his novel.

Finally, and not at all relevant to the book under review, here are a couple of quick lists I noticed in a newspaper one day during the national lockdown. (The first one, that is, in case we soon have a second.) I’m sure you’ll have a few suggestions of your own.