FILM: A contrasting couple who make for an unusual double act

Russell Crowe and Ryan Gosling are The Nice Guys of the eponymous film. Crowe plays Jackson Healy, a rough-and-ready bruiser who will administer physical retribution for a price; Gosling is Holland March, a down-at-heel (aren’t they always?) private detective in Los Angeles. They are introduced in inauspicious circumstances when the former beats up the latter over a matter that, quite tenuously, links what happens later. March is found in grave discomfort after  this punishment by his 13-year-old daughter Holly (played by Angourie Rice) who, on discovering what Healy does, tries to entice him to accept a contract to deal with a classmate. He declines.

Crowe puts in a solid performance as a man keen on a bit of violence, Gosling likewise as a guy who is keen on a lot of booze. The film was directed by Shane Black, and this weirdly entertaining comedy thriller has something of the feel of David Lynch’s Mulholland Drive – though maybe that’s in part down to the LA locations – and also of his iconic and unfathomable television series, Twin Peaks…

…which leads us on to Misty Mountains. (No sign of Laura Palmer.) Misty is a soft-porn model – you can probably guess what the ‘mountains’ refer to – whose image is being ogled by a young boy in a magazine nicked from under his parents’ bed when, coincidentally, a car smashes into the roof of their house (this being Hollywood, you know from the off that the crash is no accident) and inside it is Misty, barely dressed as she succumbs to her injuries, to the boy’s fascinated horror. However, a couple of days later her aunt is certain that she has seen Misty alive and well. Healy and March, somehow, get assigned the job of finding out what on earth has been going on. 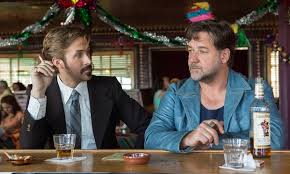 But what exactly is it they are trying to find out? Because here confusion, while never actually reigning, certainly has the upper hand. If Misty is alive, how did she survive her injuries? If she’s dead, then why did she have to die in such spectacular circumstances? And who was behind it all? And, moving on, who has kidnapped the mysterious Amelia (Margaret Qualley), whose disappearance was the catalyst that got Healy and March bruisingly connected in the first place? As with Misty’s body, pretty much all is revealed in due course.

There is a splendidly ridiculously shoot-out with a neat twist after the apparent denouement, and amid the comic mayhem there are hints of greater evil at work even though this is a world in which any air of serious menace is repeatedly diluted by the fact that the killers are such obvious goons and, besides, the strippers are dressed as mermaids. The overarching plot – if that word can really be justified in this movie – is of a possible government conspiracy and of the overwhelming power of the automotive industry. (Never mind Washington: if Detroit wants you dead, then apparently you’re done.) Yet somehow it works as terrific entertainment. Nonsense maybe, but still fun.

49 thoughts on “FILM: A contrasting couple who make for an unusual double act”