FILM: A story to make your troubles seem so far away?

Directed by Danny Boyle, written by Richard Curtis and with a soundtrack based on the songs of the world’s most legendary pop group, what could possibly go wrong with the film Yesterday? Well, enough for Kevin Maher in The Times to pronounce it “a project that’s all premise and no payoff”. The Fab Four turned into a futile funk, then?

And the premise is a bit bonkers. Jack Malik (played by Himesh Patel), a struggling singer/songwriter, rides his bicycle into the path of a bus and is knocked out, this at the precise moment there is a brief global power cut. Because he is temporarily out of it, his memory remembers the Beatles and their songs after he comes to whereas the mega electrical malfunction has somehow caused the rest of the world not to know who they are. Their records no longer exist. They aren’t even on Google. It was Samuel Taylor Coleridge who wrote of “the willing suspension of disbelief” and the central plot device of this film certainly requires that. In spades. If you’re one of those people who find themselves watching a movie or the TV and quite often thinking ‘that’s ridiculous, that could never happen’, then maybe you shouldn’t bother seeing Yesterday tomorrow. 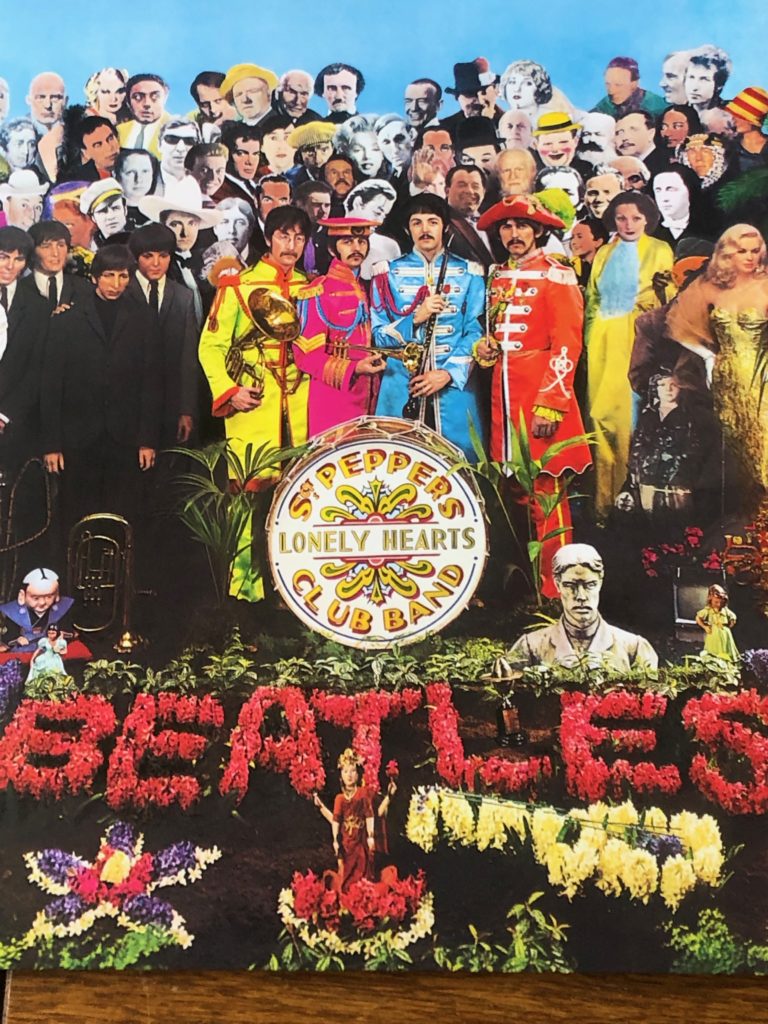 Perhaps the most famous Beatles record of all, Sgt Pepper, though Yesterday is not among its tracks

The title song makes its appearance when Jack’s manager/friend Ellie (Lily James) buys him a new guitar, post accident, and he uses it to play the song to her and other friends. They are duly impressed. “When did you write that?” she asks. After a bit of inevitable back and forth, he discovers that indeed they have never heard of the Beatles. Opportunity knocks. He takes it.

Of course, again inevitably, Jack eventually begins to suffer from imposter syndrome as the whole world laps up these fantastic new songs from this previously utterly undistinguished musician. Ed Sheeran (as himself) is among the seduced, this to the extent of asking Jack to be his supporting act on his new tour beginning in Moscow, this having seen him perform on a Lowestoft TV programme. (In part the film seems like an extended promotional video for Suffolk.) After the gig he challenges Jack to a song-writing completion; who can come up with the best offering given 10 minutes alone. Ed manages a dirge of some sort; Jack invents The Long and Winding Road. Ed concedes he’s no longer the hottest songwriter on the plane.

The certain sense that the wheels will eventually fall off the bandwagon is given further impetus by the performance of Kate McKinnon as a manic LA studio manager and the appearance of Sarah Lancashire as one half of an odd couple who, like Jack, do know the Beatles songs, although we don’t know why they haven’t succumbed to the same memory loss as everyone else. But frankly that doesn’t matter. The ending, as Jack reassesses his relationship with Ellie and how he’s going to get himself out of his predicament, is rather predictable in a warming and pleasurable way. Imagine a world without the Beatles? That’s hard to do. And, as the Sarah Lancashire character says: “A world without the Beatles is a world that’s infinitely worse.” All considered, though, a more appropriate title for this film might have been All You Need Is Love.

598 thoughts on “FILM: A story to make your troubles seem so far away?”