This understated but beguiling story (it’s a U certificate) is based on a Jane Austen novella called Lady Susan, which she wrote at the age of 19. The book has made it to the cinema under the guidance of Whit Stillman with the title of Love & Friendship and has Kate Beckinsale splendidly cast as the widowed Lady Susan Vernon – “the most accomplished flirt in all England”. She is simultaneously enchanting and scheming as she figures out how best to secure the financial futures of her daughter, Frederica, and of course herself, this mostly being done from the home of her sister-in-law at which she has suddenly arrived after causing marital mayhem at the previous pile where she’d been living.

Amid Susan’s sultry presence, Frederica is being pursued for marriage by Sir James Martin. Susan explains to her American friend and confidante, Alicia Johnson (Chloe Sevigny), that “he is vastly rich and rather simple”. Her friend beams broadly and simply says: “Ideal!” And a simpleton he certainly is; “a bit of a rattle” as one character calls him. He doesn’t understand the difference between poetry and prose, has never seen peas before – and he has no idea as to the gestation period of a human being. At one point Frederica complains to her mother that she cannot marry Sir James, even though he’d be OK as pretty much any other type of relative, because he’s too stupid and “marriage is for your whole life”. Her mother airily replies: “Not in my experience.” 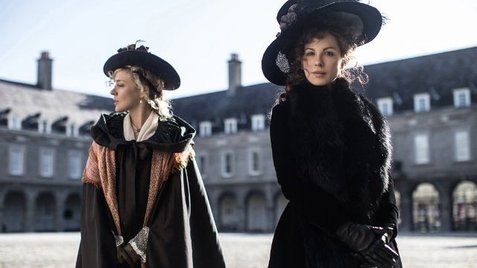 Some of the lines are waspish enough to imagine they might have been penned by Oscar Wilde. Or Dorothy Parker. Susan and Alicia are in conversation when the former is greeted by a man, clearly an unwanted interested party, making his one and only appearance on screen. “Be off with you,” she yells. “I’ll have you whipped.” Alicia sympathises at her being approached by a random fellow. “No, I know him well,” contradicts Susan. “I would never speak to a stranger like that.”

It’s via her conversations with Alicia that we are left in no doubt that not only is Susan an extremely alluring woman but that she is extraordinarily duplicitous – almost admirably so! – and thoroughly deserves her reputation as a magnet for scandal. Alicia is married to Mr Johnson (of course), played by Stephen Fry, who regularly insists his wife breaks off her friendship with this scarlet woman. He threatens to send her back to Connecticut, whence she came. “I hear the Atlantic Passage is very cold at this time of year,” he declares. That line could have come out of Blackadder!

Susan, for her part, dislikes him and denounces Mr Johnson to her friend as being “too old to be governable, too young to die”. On being told by Alicia that one of her suitors, Reginald De Courcy, has found out about her liaisons with another, Lord Manwaring, Susan protests: “Facts are horrid things.” But they don’t get in the way of us delighting in her deceit.