FILM: Churchill – a story of awe and war

Gary Oldman has apparently said he smoked 12 cigars a day for three months in order to achieve the right rasping sound of Winston Churchill’s voice for his depiction of him in Darkest Hour. I don’t know how many he actually smoked in the making of the film but on screen he is seldom without one; seldom without a tumbler of whisky either. He makes Joanna Lumley’s Patsy in Absolutely Fabulous seem a cigarette-averse teetotaller. Oldman, impressively made-up in latex, padding and who knows what prosthetics in order to resemble Britain’s great war-time leader, is on screen pretty much the whole time, sparring with his Tory party colleagues, notably Neville Chamberlain (Ronald Pickup) and Viscount Halifax (Stephen Dillane), who loathe him and despise his formidable commitment to taking on Hitler despite all the odds and, to their minds, the absence of sense. There are excellent female roles for Kristin Scott Thomas as his long-suffering but super-understanding wife, Clementine, and for Lily James as his assistant, Elizabeth Layton, but this film is essentially about one man. (Oldman was voted best actor for this role at the recent Golden Globes.) The film could have simply been called Churchill (Oh, yes!) if Brian Cox had not already starred in a movie of that name.

The story is set in May 1940, which takes in the beginning (although not the conclusion) of the small-boats rescue of British forces trapped at Dunkirk and Churchill’s thundering “fight on the beaches” speech to Parliament, which Robbie Collin in the Daily Telegraph suggested “Oldman plays like the guitar solo in a stadium gig”. That pretty much nails it. Oldman brings to those famous words the right degree of awe and gravity. Elsewhere in the film, when he he is not grandstanding in front of his Parliamentary colleagues, he is portrayed as being both considerate and cruel, funny and frightening. At one point over lunch with King George VI (Ben Mendelsohn), his monarch tells Churchill that he frightens people. Churchill is, or at least affects to be, surprised. “Well, you frighten me,” says the king. 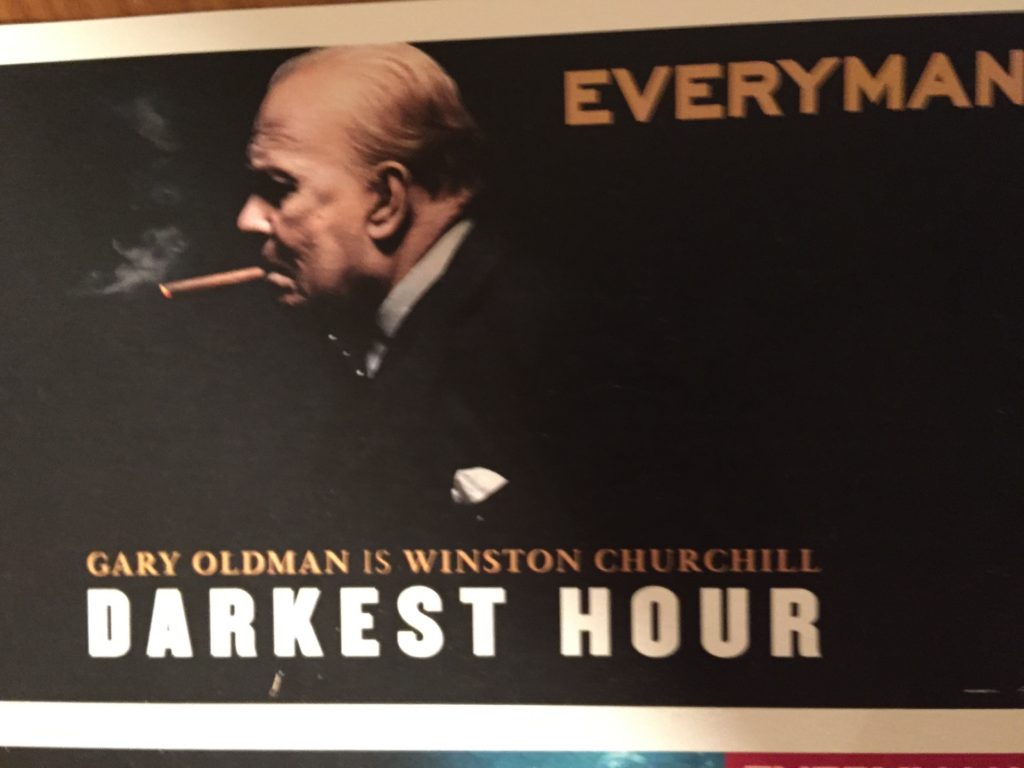 The blurb above the title of the film gets it spot-on: Gary Oldman does indeed come across like Churchill

But not everyone  all the time. The photo on the home page shows Churchill gesticulating the V for victory sign he has seen people demonstrating in the streets. Amid giggles and consternation, a diffident Miss Layton informs him that he’s displaying his fingers the wrong way. The way he’s doing it means “Up your bum”. He dissolves in laughter.

The movie was directed by Joe Wright, who was also responsible for Atonement, another big film that had a major war theme running through it. His touch is deft if not always perfect. There is a scene on the London Underground, to where Churchill has descended in order to take the advice of the king and seek the opinions of ordinary people about whether to appease Hitler or wage war against him, and he is pleased to find that the general public seems to be in accord with his own belligerent views. But the scene looks out of place and seems saccharine, albeit one could believe it could take over five minutes to travel the one stop from St James’s Park to Westminster.

“This is my stop,” says Churchill/Oldman as he prepares to leave the tube carriage. Westminster was indeed his place.