There are three stars in La La Land. Ryan Gosling plays Seb, an aspiring jazz pianist making ends meet by playing Christmas jingles; Emma Stone is Mia, a barista who – total shock alert, this being set around Hollywood – wants to become an actress. And there is Los Angeles, the city of angels, portrayed sometimes in a similar manner to the way in which Woody Allen would so adoringly depict New York. The opening scene even makes virtue of a chief curse of contemporary LA life: gridlock. The song-and-dance sequence that thrives out of this unlikely flyover situation is choreographed magnificently. After it ends and everybody gets back into their vehicles, Seb honks at Mia because she has not got her car moving; she’s poring over a script she’s about to audition for. She duly gives him the finger. Not an auspicious start to a relationship but things do get better. (They are shown in happier mood on the home page.)

According to the Oxford Dictionary, the definition of the term ‘la-la land’ is “Los Angeles or Hollywood, especially with regard to the lifestyle and attitudes of those living there or associated with it”. Seb and Mia are looking to get up there with the best of them, and while their singing might not be the best (thus writes someone who is basically tone deaf), especially Gosling’s, the dance numbers are vivacious, notably in the signature piece that is displayed on the film’s poster (shown below), showing them strutting their stuff under a glorious night sky with the city sparkling beneath them. 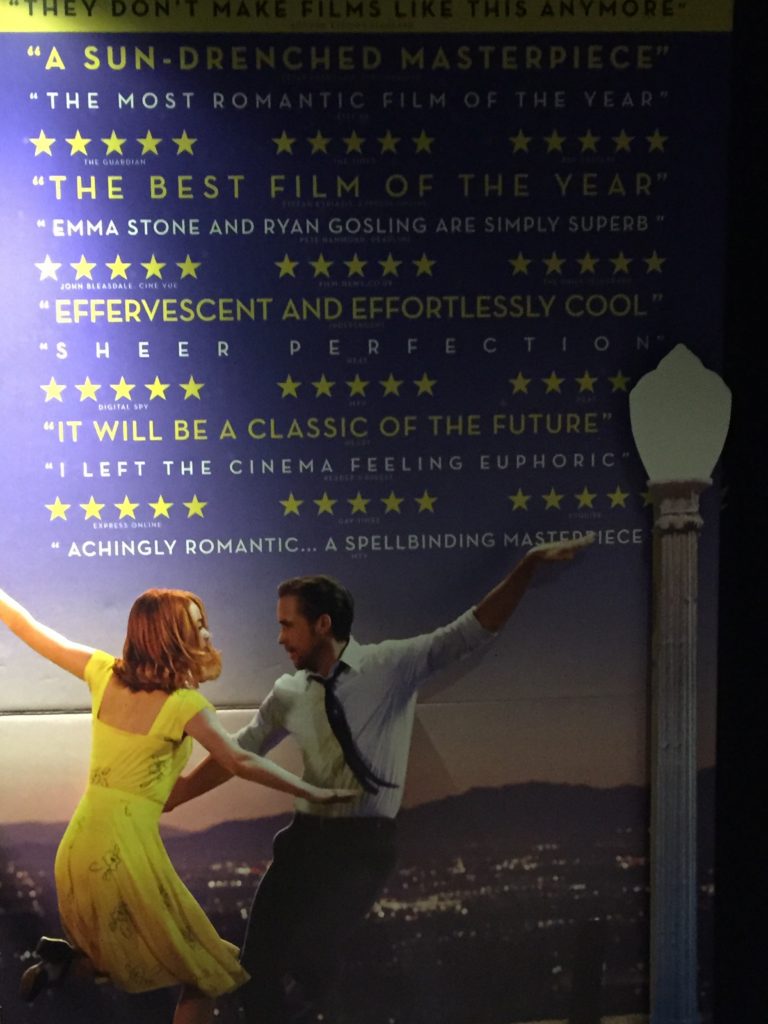 Stone & Gosling: not perhaps poetry in motion but nevertheless showing some style above the LA lights

The film unashamedly references classic musicals such as Singin’ in the Rain – indeed, perhaps especially that one – and the vibrant primary colours of the costumes hint at a bygone era even while the characters use mobile phones, drink branded coffee and the like. It’s certificate is a 12A because although Seb and Mia live together their physical interaction is totally chaste, assuming you don’t count a few kisses. This is not that sort of movie.

Nor is this a story of boy meets girl and they live happily ever after. It’s a tale of two people who fall in love but whose life together is threatened as they pursue their different dreams. If it had been a jazz song, Joy Division’s Love Will Tear Us Apart would have been appropriate for inclusion in the soundtrack. (Actually, why not anyway given that room could be found – in a hilarious segment – for A Flock of Seagull’s I Ran?) The end of the film takes a five-year leap ahead so that we see where they have got to with their respective ambitions. There is a Sliding Doors-type scenario which seems oddly both out of place and yet somehow right. It’s one of the smart aspects of this film – even the bits that should not quite work manage to leave you satisfied.

The film was directed by Damien Chazelle, who is only 31 (and apparently a huge jazz lover) yet he has made a movie that feels both modern and nostalgic. It won seven Golden Globes and has been nominated for 11 Baftas, which will be handed out in London on February 12. It is also expected to be bounteously rewarded at the Oscars on February 26. Go on – you know you can’t resist seeing it!