FILM: In which Christian is in his cups

In Terence Malick’s latest film Knight of Cups, Christian Bale plays Rick (just ‘Rick’ – there are only Christian names in Christian’s latest gig) in a project that comes with a classy cast and the question as to whether any of their agents bothered to look at the script. If there ever was a script.

In addition to Bale, for example, there’s Antonia Banderas, Cate Blanchett and Natalie Portman. Blanchett plays Rick’s estranged wife while Portman is one of the many women he hooks up with. In a film which is extraordinarily obsessed with itself, the plot basically consists of Rick wondering where it all went wrong. Of course, when it comes to analysing Rick’s apparent existential angst, there might be some who’d figure that if one could consider it a curse to be an in-demand Hollywood scriptwriter with a beachside house, non-stop parties and a limitless supply of glorious women…well, that might instead be the definition of an emblematic first-world problem. 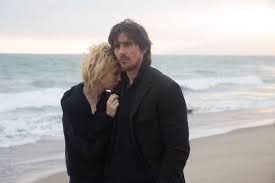 If you didn’t have notes about the story in advance of seeing this, as a film critic would get, I think you’d probably have no clue what was going on for most of the time. The over-use of voice-overs adds to the confusion as Rick seems to suffer not so much from a midlife crisis as from midlife ennui. Essentially, very little to the verging on nothing happens in sometimes beautiful and elegant circumstances; it’s a bit like watching a French fashion advertisement without having the benefit of speaking French. Oh, and the film has the most underwater shots of women in swimming costumes than anything I’ve seen since the last coverage of synchronised swimming at the Olympics. The film’s title comes from a tarot card but I’ve read (OK, heard about) more compelling horoscopes.

However, to finish on a comparatively positive note, whatever the location manager was paid for scouting the LA settings, it was way too much. For the most part, they are stunning. He or she should have been doing the paying – a bit like the Peter O’Toole exchange with Woody Allen (as Victor) in What’s New Pussycat, when he asks if Victor has a job:
“Yeah, I got something at the striptease. I help the girls dress and undress.”
“Nice job.”
“Twenty francs a week.”
“Not very much.”
“It’s all I can afford.”

There aren’t many laughs in Knight of Cups either. Bale was in another recent release, The Big Short, which I reviewed here previously, which was excellent. Title-wise, this effort could perhaps have been styled as a 70-year-on remake of The Big Sleep.