FILM: The Angelina deal – water, water everywhere and Brad’s had a ton to drink

It’s only love and marriage, I guess. As Nigel. M. Smith in The Guardian noted: “Only a star of Angelina Jolie Pitt’s immense clout could get a film like By The Sea made…[it’s] essentially a chamber piece starring her and her husband, Brad Pitt…Not much happens.”

Well, there’s a lot of meaningful looking at each other on the part of Brad (he plays Roland) and Angelina (his wife, Nessa), and we get it affirmed that she can certainly do sultry even if sympathy seems beyond her, but story-wise there’s indeed not a lot going on. On the other hand, I guess there are worse ways of spending a couple of hours than watching Angelina do what is – between odd bouts of nudity – basically a £10 million (whatever the budget was) promotion for expensive lingerie and negligible negligees. I’m sure her pal William Hague has already pre-ordered the DVD, which is likely where this would have gone straight to if it had been one of Madonna’s offerings.

This is Jolie’s third film as a director. She also wrote the script, presumably her bash at attempting to create a European art-house picture. The title, we learn near the end  – don’t worry, it’s not a spoiler – is that of the book that writer’s-blocked Roland has been trying to work on 12 hours a day in a local bar, fuelled by industrial amounts of alcohol, while Nessa stays in their room at a nearby luxury hotel, downing pills, reading books and spying through a convenient peephole on the young couple next door while they have sex.

Roland and Nessa are implausibly wealthy and still have love for each other somewhere amid the wreckage of their dystopian marriage, but their most intimate bonding occurs when they take turns at watching their neighbours in action. When they actually get round to it themselves, it’s in a bath, having previously failed to close the deal in a shower. There’s also a small dramatic twist, which Jolie only reveals near the finish, but then she can: it’s her film and she’ll cry when she wants to. (There is a lot of water involved – even the peephole seems to be leaking.) 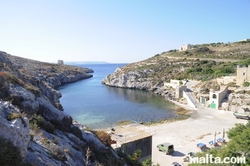 By the sea – just what it says on the tin; this is where the Brangelina film was shot

Late last year Hollywood was agog at the publication of emails between some major players in the movie industry, among which the Oscar-winning producer Scott Rudin referred to Jolie’s “insanity and rampaging ego” and called her “a minimally talented spoiled brat”. So Angelina does have her knockers. And I’m not sure if she was also responsible for the casting but it is probably fair to say that her nipples produce the stand-out performance in this film. The best line perhaps goes to Melvil Poupaud, who plays Francois, the male half of the energetic duo next door. The four of them go on a sailing trip. Roland has told Francois this is his first time, at which point Francois tells him he’s “a natural” and then hands over a hilariously magnificent phallus-like rudder with the words: “Can you hold it for me?”

Set in the South of France in the 1970s, the film is actually shot on the Maltese island of Gozo, at Mgarr ix-Xini – and no, that’s not easy for me to say. The setting looks gorgeous; Angelina was likely the locations manager as well. Despite its pitfalls (sorry), the film is a bit more than a vanity project based on voyeurism. But maybe not enough so.