FILM: The Favourite in more ways than one

This rattlingly vibrant film was an early…er, favourite to scoop up many honours in the upcoming film awards season, not least for its leading lady. ‘Olivia is my favourite for an Oscar’ was the headline above the review in The Times, and certainly Ms Colman has given her depiction of the early 18th-century Queen Anne her all. And she didn’t have to wait long for appropriate acknowledgement – on Sunday she won the Golden Globe for best actress in a film/comedy musical. But this is entertainment, not a history lesson. It is true that Queen Anne, shockingly and heartbreakingly, had no surviving children despite falling pregnant 17 times. (Most were lost through miscarriage or were stillborn; three survived very briefly.) There is no record however that, as shown in the film, she sought a quantum of solace by having 17 rabbits around her. She may or may not have enjoyed sapphic relationships with two women in her court – their rivalry for her favours gives the movie its name – but for sure she was married to Prince George of Denmark, who is not even mentioned in the film. That is one hell of an airbrushing.

Made by the Greek director, Yorgos Lanthimos, The Favourite is very much a female-led film. The two main roles who orbit around Colman are played by Rachel Weisz as Lady Sarah, the Duchess of Marlborough, and Emma Stone as her cousin, Abigail. She is shown on the home page and on the screen she delivers her dialogue with no hint that she is American rather than English. I suspect the whole confection will remind you of several other creations that have entertained us down the years – Dangerous Liaisons, The Madness of King George and Miranda Richardson acting all royal in Blackadder. 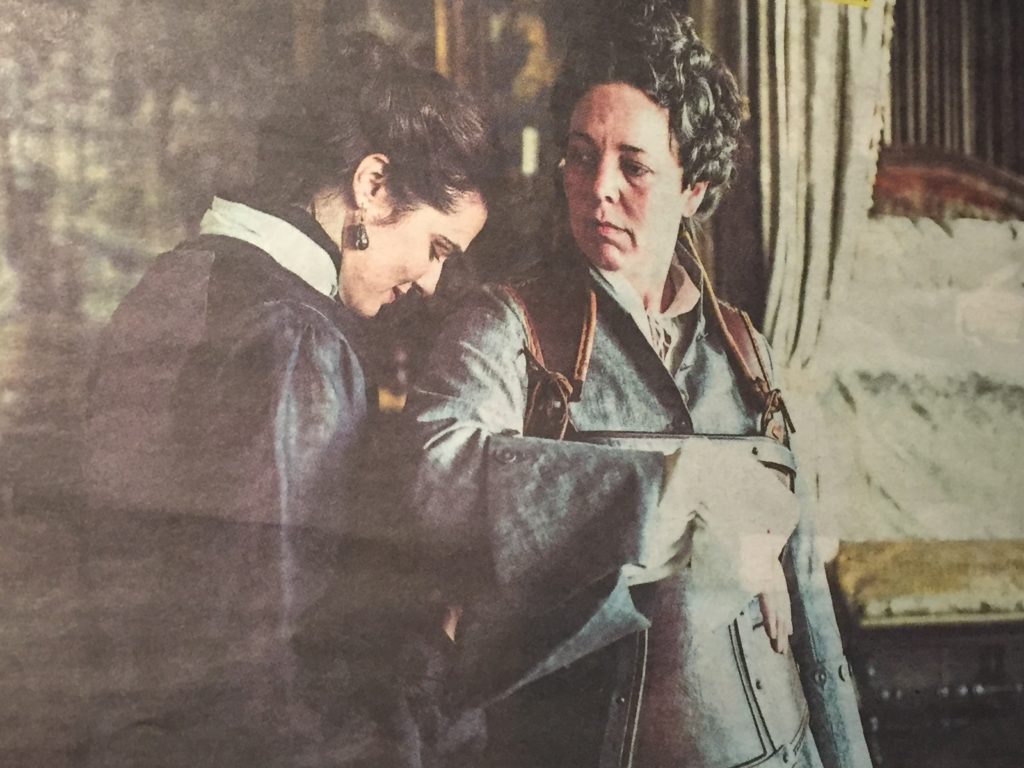 Lady Sarah is the queen’s friend and confidante who uses her position to exert influence, frequently in a demeaning and hectoring fashion, over the monarch and over parliament, not least in order to advance the career of her husband, who is leading British forces against the French army across the Channel. At the film’s start the household is joined by Abigail, whose life has somewhat fallen apart since the financial ruination of her father. She joins the staff as a kitchen hand, progresses to become Sarah’s maid and eventually the queen’s. She begins the film as a sweet-spoken, kind-hearted young woman and ends it as a viperous bitch who’ll allow nothing to get in her way. It is Sarah’s misfortune that she is in the way.

Despite this element of bitter intrigue, the script provides several good laughs – sleeping like “a shot badger” being one such – and the bawdy humour probably accounts for the 15 certificate. The C-word is used quite liberally, mostly by Sarah and Abigail, and the line “you must suck for your supper” doesn’t leave a great deal to the imagination. If the film was going to be retitled, Carry On Queenie might be the go-to option. For as good as Weisz and Stone are, this is essentially Colman’s film. Queen Anne’s unpredictable rages and occasionally violent temper are part of her make-up, so too the glimpses of a kinder and gentler person. Above all, perhaps, Colman marvellously portrays a woman who looks as haunted as anyone would be who had suffered as she had in childbirth. At times she appears demented, at times destroyed, but then who wouldn’t be? She is a queen but life has been cruel.