FILM: The Girl on the Train – the movie…or the book?

One of the most esteemed novels of the past 30 years is probably Tom Wolfe’s The Bonfire of the Vanities. It was published in 1988 and was rapturously received. The inevitable film arrived in 1990, starring Tom Hanks and Bruce Willis. It was widely deemed to be a total turkey.

In between the publication of the novel and the release of the film, in a wholly unrelated event, a 17-year-old woman called Paula Hawkins moved to London from Zimbabwe. You likely will have heard of her. You’ll almost have certainly have heard of her book: The Girl on the Train, her first attempt at novel-writing after 15 years working as a journalist. It was published in January 2015. Last weekend it was in fourth place on the Sunday Times list of fiction paperback bestsellers. Yes, over two years after it came out. The film was realised last year but I only saw it recently; hence the timing of this blog.

The principal character – you absolutely cannot call her a ‘heroine’ – is Rachel Watson, a divorced dipsomaniac with multiple disorder issues. (She is also absolutely not a girl, but the publishers had noticed the commercial success of a book called Gone Girl and, hey, they weren’t stupid.) By day she takes a commuter train into London, although her alcohol-dependence means the job she used to take it to has long gone. It’s a journey which means she passes the house in which she used to live with her husband but where he now is with his new wife and their baby. Everyday she longingly looks at this reminder of her previous life, seeing her old home and other people who used to be neighbours. Then one day she sees something that should not be happening: a woman she knows in an embrace with a man whom she knows is not her husband. She needs to find out more, even more so soon afterwards when the woman in question goes missing. 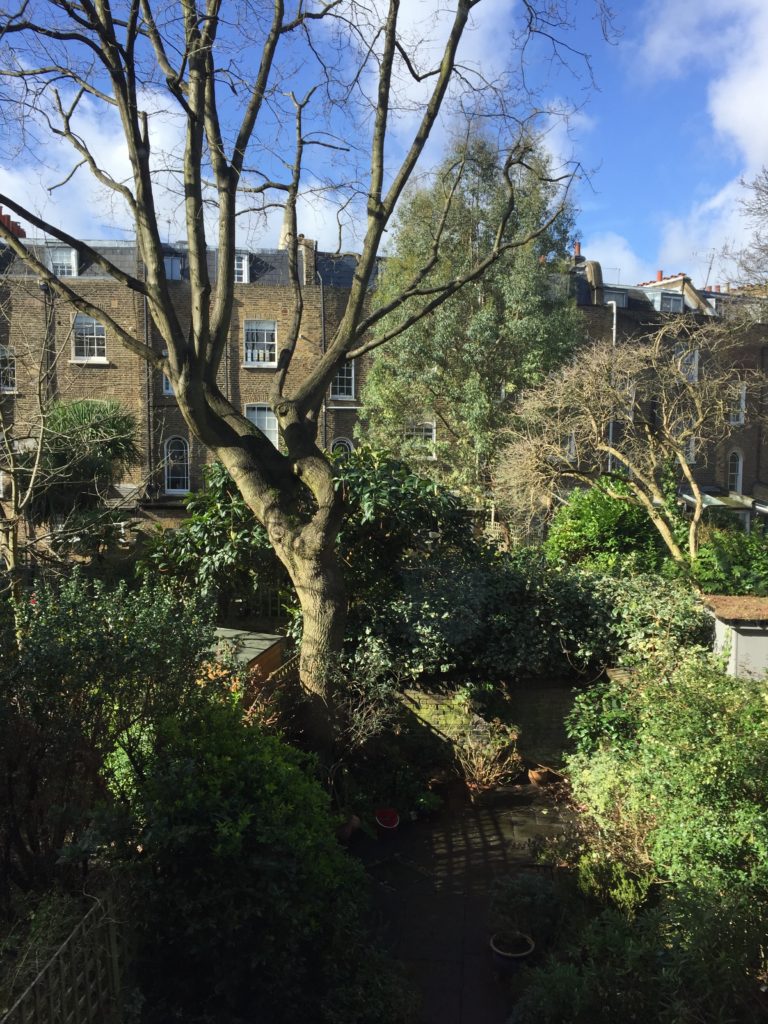 OK, granted, so it’s not possible to see into these houses either, but maybe if the tree wasn’t in the way?…

When one sees the film, it is incongruous that the homes Rachel is trying to peer into are mansions close to a railroad in and out of New York. It would make much more sense to have them be the humbler properties described in the book. That was what Hawkins wrote about and they would certainly more readily lend themselves to some successful Peeping Tom-type activity. The reason why is more interesting than the desire of DreamWorks or the director, Tate Taylor, to set the movie in the States rather than the UK. It was because the story was optioned before anyone knew the book was going to be a massive hit, and preliminary work had begun on the film before the book’s sales went bonkers. Also, which I think is very reasonable, Hawkins reportedly didn’t care much where they located it so long as the enormous cheque didn’t bounce.

The only major name in a leading role is Emily Blunt as Rachel. (Lisa Kudrow has a small part.) She looks suitably haunted, confused and vulnerable as she attempts to make sense of what has really happened in her past marriage to Tom and what has recently occurred to the missing Megan, all this while trying to stay sober, not always successfully. Some of the scenes are somewhat confusing, I think fundamentally because disorientated flashbacks probably work better in books than on the screen. In fact, I felt the same way about Gone Girl. Unlike with The Bonfire of the Vanities, if you enjoyed the book you will probably enjoy the film – even though, since it’s a thriller that rightly sticks to Hawkins’ original story, there will be no twists, with or without a corkscrew, to surprise you.