FILM: Why Love is a matter of taste – like Nigella…

The French film Love, written and directed by Gaspar Noé, features something that happens all the time, all over the world. Sex. In many ways, that would probably have been a more fitting title. On-screen sex happens in a lot of movies – pretty much anything except James Bond these days – but in this instance it’s for real. You may or may not find it stimulating but it’s not simulated.

Yet there is a story here. This isn’t porn (in fact, the man from The Times thought it was a yawn), where the woman doesn’t even get to have her fridge fixed by the handyman. It’s essentially about a complicated three-way relationship. The male lead, Murphy, is with a woman, Omi, with whom he’s has a child yet all the while he’s yearning for another woman, Electra, who used to be in his life. There’s full-fontal everything and a couple of scenes where you wish he hadn’t after all decided to shoot the thing (the film as well) in 3D.

At one point Murphy declares: “I want to make movies out of blood, sperm and tears.” Not exactly Churchillian, I grant you, even though his speech was presumably the inspiration for the line, but it does give you an idea of what underpins the film. It is intimate – well, as much as anything can be when there are six cameramen around. It also explores how sex and relationships can at times inform everything we think and do.

This movie brings to mind an essential weirdness about cinema, whether it’s art-house French or mainstream Hollywood. For some reason, people seem more comfortable with extreme violence than – to put it this way – extreme sex. If I may mention James Bond again, take Spectre. (Cue obvious joke, I know.) It’s apparently OK to show a guy having his eyes gouged out but, after a bit of chaste kissing, Daniel Craig takes leave of Monia Bellucci’s bed with her pretty much fully clothed. I mean, please. 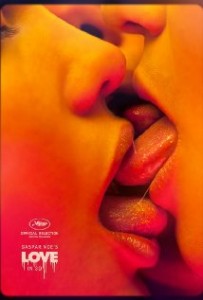 Not a lot of sealing going on with this kiss…and yes, the film is French

By the way, if you think the poster for the movie that’s depicted here is a bit steamy (as opposed to maybe…er, distasteful?), you should see the alternative version that was prepared but then deemed to be rather too much. Let’s just say that, fresh from the imbroglio with her grilled salad, it could have served as an illustration for Nigella Lawson preparing an unusual dish of spotted dick (without the spots) and white sauce…

47 thoughts on “FILM: Why Love is a matter of taste – like Nigella…”