This is not a particularly auspicious time to be writing a blog about film. Mostly because there aren’t any to go to see – well, not if one is talking about doing that at the cinema. The new James Bond film, No Time To Die, was scheduled for release next week. Not any longer. It’s been bumped back to November because of the coronavirus. Mission: Impossible 7 is among the movies on which shooting has been halted for the same reason. Given it was being shot in Venice, this is no surprise. Among other casualties was the Red Sea Film Festival, which would have been the first one in Saudi Arabia and would have celebrated the ending of a 35-year ban on cinema in the country. We do live in very unusual times but I doubt anyone is estimating it will be quite that long before UK cinemas can open their doors again.

The photo on the home page shows the interior of an Odeon DeLuxe cinema. Last week, that chain announced that its cinemas were to close because of the coronavirus epidemic. Cineworld, the world’s second-largest cinema operator, has warned the temporary shut-down – which, of course, is not confined only to the UK – could lead to the company’s permanent closure. The biggest chain, AMC, witnessed a 30% drop in its share price earlier this month. These are very tricky times for the products of Tinsel Town. 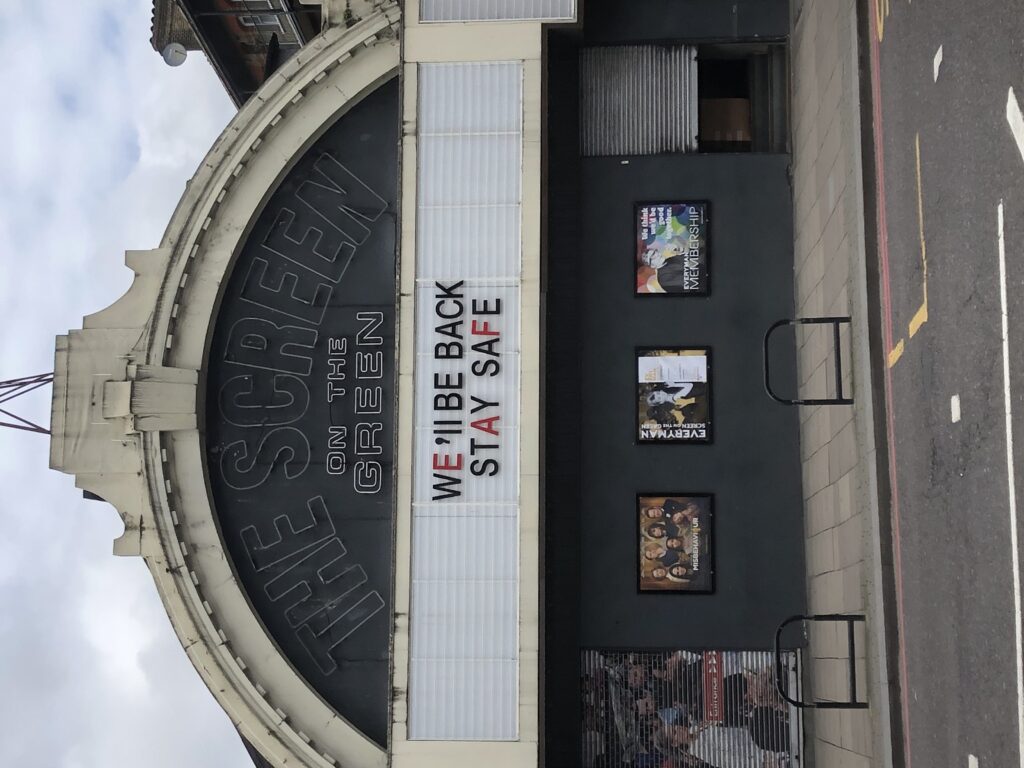 The Screen on the Green in Islington, London N1…normally a very comfy cinema but now sadly dark

The most glamorous film festival of all, Cannes, has been officially postponed from May to the summer, but it’s probably fair to say that no one expects it to happen this year. And the Bond film wasn’t the only high-profile casualty in terms of its release date. Disney’s live-action remake of Mulan was supposed to open in America on Friday but it, too, has been pushed back to the autumn. Or later? When eventually it does make it into cinemas, I would bet there might still be a desire among audiences to retain some levels of social-distancing, with perhaps some seats left unbookable to avoid any risk of over-crowding. In fact, talking of which…

…it wasn’t as if everything was rosy in the movie business before coronavirus took a hold. At the end of last year, it was reported that there had been a decline of around 20% in the number of young people going to the cinema. Industry figures said that one thing that might improve matters would be to have sofas in the foyers for audiences to relax before the show, and more comfortable seating within, as seen in the photo on the home page. Also, and something of a bugbear of mine, it would be helpful if it was made clear when a film started and when it finished. As you will likely know, the norm is that the film is listed at starting at, say, 7.30 but after a raft of adverts and trailers it doesn’t actually begin until some point shortly after 8. Oh well, I guess that’s one for future consideration. The film business, in common with pretty much everything else, has presently got something rather more urgent and pernicious to deal with.