FINANCE: Being economical with the truth?

It was James Carville, an advisor to Bill Clinton’s successful presidential campaign in 1992, who coined the phrase “It’s the economy, stupid.” It’s been a political staple ever since that the subject voters most care about come an election is the state of the nation’s finances; or more pertinently, their personal ones.

The words probably reflect the sentiments of most Chancellors of the Exchequer, including the present incumbent, George Osborne. He seemed very pleased with himself after his recent Autumn Statement, in which he revealed the government’s spending plans between now and 2020, when the next General Election is due. Yet it was hard not to bring to mind the words J.K. Galbraith, arguably America’s most famous economist, who said: “The only function of economic forecasting is to make astrology look respectable.”

The chancellor also performed what in journalistic terms would be a perfect “reverse ferret”; the cuts in tax credits which were set in stone before he got to his feet in the House of Commons would now not only not be phased in, they would be “avoided” altogether. (‘Chancellor in tax-credits avoidance scandal’.) He could do this, it transpired, because of an unexpected tax and forecasting windfall of £27 billion. What was it Galbraith said about economic forecasting? Quaintly, this was characterised by several media outlets as money the chancellor had found “tucked under the sofa cushions”. Indeed; cushions of a sofa that may or may not exist in four to five years time. 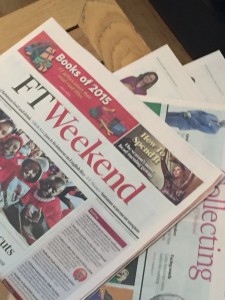 An analysis in the Financial Times was just the latest place I’ve seen it remarked that what the chancellor says is often precisely the opposite of what he does. The government is quite fond of saying the responsible thing to do is “fix the roof while the sun shines”. Philip Stephens in the FT suggested that by the time Mr Osborne was done with the economy, there might be no public building left to be in need of a roof. “By cutting the size of the state the chancellor is also pulling it out of all recognisable shape,” he wrote.

At a time when the cost of borrowing could hardly be lower, the government refuses to do it. Logically, is this the economics of the inane or the insane? But, hey-ho, what do we know, though perhaps we should forget about astrology. The chancellor’s latest sleight of hand could give palmistry a good name.