FINANCE: Brexit and the future of taxation

This is not a good thing for the UK overall but 40% of the national tax take comes from London and the southeast. As has been pointed out to distraction, London voted heavily to remain in the European Union in the referendum of June 2016. The country as a whole voted otherwise. The ramifications are yet to be known – indeed, some days it seems that meaningful negotiations have hardly begun as we head to Brexit in less than 12 moths time – but for sure London’s biggest source of revenue is generated by financial services and it seems certain that sector will be hurt, perhaps badly, once Brexit has occurred. And being so reliant on one income stream is not a desirable situation for the government, of any hue, to be in. What to do, then?

I think it will likely increasingly be the case that it is not so much individuals who will be the taxation target. After all, individuals – especially non-British by birth – might simply up sticks and leave the country if the tax burden got too heavy. But there are some mega companies who need to be here. The logo of one such company, Google, is shown on the home page, albeit since October 2015, via a corporate restructuring, it has a parent company, Alphabet Inc. – this even though Google is one of the best-known brand names on the planet. There are others, too – Facebook, Apple, Amazon, Netflix, Starbucks and more. I wonder if future government strategy will be to cut through the Luxembourg-type red tape (perhaps easier to do once we’re out of the EU?) and find a way to tax these companies appropriately to reflect the amount of business they do in the UK? This would be at a much higher rate than exists now but not so much that it would no longer be worth their while to trade here. 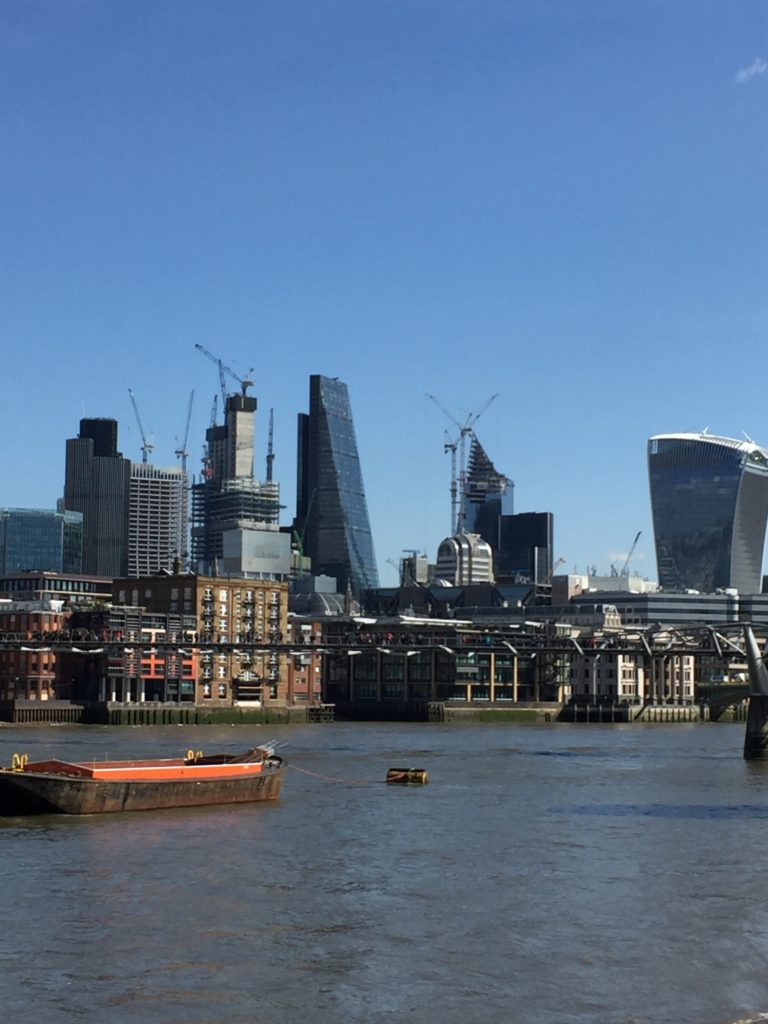 Looking across the Thames to the City of London, upon which the UK economy is now far too dependent

Of course, this is not just about finance. Google and Facebook have been in the forefront of ‘fake news’ concerns, and that’s ignoring the ginormous elephant in the room: the apparently improper harvesting of personal data from Facebook by Cambridge Analytica. Lord Hall, the director general of the BBC, said last month that the tech giants “will skilfully mine every ounce of personal data to drive growth and profit”. Ha, you might think, he would say that, wouldn’t he, because he’s running a rival media service? Which is true so far as it goes but it misses the main point: the BBC itself is not concerned with making profits. It’s funded by the taxpayer. When one reads such projections, as I did the other day, that within the next two years over 95% of advertising budgets spent by UK companies will go to Google or Facebook…well, one can see what he means. If that proves to be correct, it wouldn’t leave much left over for anyone, and indeed everyone, else.

None of the above means nothing can be done at an individual level. The Labour manifesto at the last General Election called for a 45% rate of tax on annual incomes above £80,000 and 50% on anything over £123,000. That’s more than current rates but hardly radical. For most of the the time Margaret Thatcher was prime minister, the top rate was 60%. (Under Ted Heath’s Conservative government in the 1970s, the top rate was 75% with a 15% investment surcharge!) The former Tory minister, David Willetts, recently argued the necessity of introducing a wealth tax in order for future generations to be able to afford the practical costs of an ageing population, one not least brought about by advances in medicine. It isn’t only the Labour left which believes taxes will have to rise. But why not try to make it work by shifting the burden more to those who really can afford it?

50 thoughts on “FINANCE: Brexit and the future of taxation”