During the last week of January, the Chancellor of the Exchequer, George Osborne, announced a settlement with the technology giant Google by which the company would pay £130 million to the British tax authorities. This was with regard to ten years of back taxes, apparently at an approximate rate of 3%. (Is that a rate you’re familiar with?) Rather smugly, Osborne declared the arrangement to be an “major success” because previously Google had paid no tax at all. As Mark Steel noted in The Independent, if every deal which yielded more than nothing was regarded in this way, a car salesman might say: “I’ve had another major success. I sold an Aston Martin for £1.”

Leaving that aside, there was general disquiet that it seemed Google had pretty much plucked a figure out of thin air (or perhaps from a computer search engine?) to decide how much it was going to cough up. As one leading tax lawyer told The Guardian:  “I don’t think in the last 20 years or so one can say that governments have driven corporation tax policy. It’s the large companies that have driven the direction of corporate tax policy.” Indeed. Shell, British American Tobacco and Lloyds Bank paid no UK corporation tax in 2014 (the most recent relevant year) despite total global profits of over £30 billion.

OK, let’s just weep about that and move back to the subject in hand. Osborne’s initial glee re the Google sell-out (sorry, settlement) was soon dimmed when it was learned that Italy was on the verge of agreeing a similar figure even though Google has only about 10% as much business there as it does in the UK. Then the European Union got involved, pledging to look at what had gone on in the Treasury. Fancy that, hey – the British taxpayer being happy about an intervention from Brussels?

The whole affair will doubtless rumble on. Indeed, by the end of the week the Business Secretary, Sajid Javid, was conceding the arrangement was “not a glorious moment”. There’s a reverse ferret for you! But there is a different issue here than mere tax avoidance/evasion that somewhat intrigues me. I can see that the business Google is in means they might, just might, be in a unique position to help countries like the UK, such as in fighting terrorism, for example. This has never been claimed by the government, but just park that thought for a moment. And then consider this. 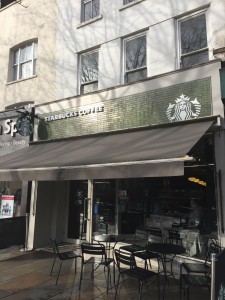 At say £2.25 for a latte, the coffee business is a good place to be; especially if you hardly pay any tax

How come Starbucks has also struck a deal with HMRC? And Amazon? And Facebook?  Why on earth does that happen? Because our government is afraid that if we don’t play ball with them, all coffee shops might close? No one would buy a book? Mark Zuckerberg might unfriend David Cameron?

In fact, there is another part of the problem, which is where Brussels comes in again; in this case not so admirably. The tax affairs of these ‘rogue’ businesses are routinely routed through Ireland, or Holland, or Luxembourg. And they, of course, are all members of the EU. That could be the subject of another rant.