FINANCE: Pretty shitty in the City

On Wednesday the Chancellor of the Exchequer, Philip Hammond, announced his 2017 budget. He scrapped stamp duty on the purchase of houses priced under £300,000, which was supposed to provide a feel-good factor for young people. He allocated an additional £3 billion to help prepare Britain for Brexit, especially given that we don’t know what sort of Brexit we’ll be eating and/or whether the European Union will be kind with us in the final negotiations. He gave more money to the NHS and halted plans for further cuts in the civil service. ‘Hammond eases off austerity’ was the headline in The Times. So trebles all round, then? Er, no. The Office for Budgetary Responsibility (OBR) opined that on current trends the nation would not be “back in the black” until 2030. That is 15 years longer than predicted by Hammond’s predecessor, George Osborne, now editor of London’s Evening Standard, when he unveiled his budget in 2010.

Fittingly, therefore, the photo on the home page looking towards the City is somewhat indicative of the financial outlook. Murky. This may well be Hammond’s last budget and it is probably the only UK budget in the next five years that will not be completely  overshadowed by Brexit – first there will be the build-up towards us leaving the EU and then there will be the aftermath of March 2019 (or maybe later depending on whatever transition terms we end up with, if any). 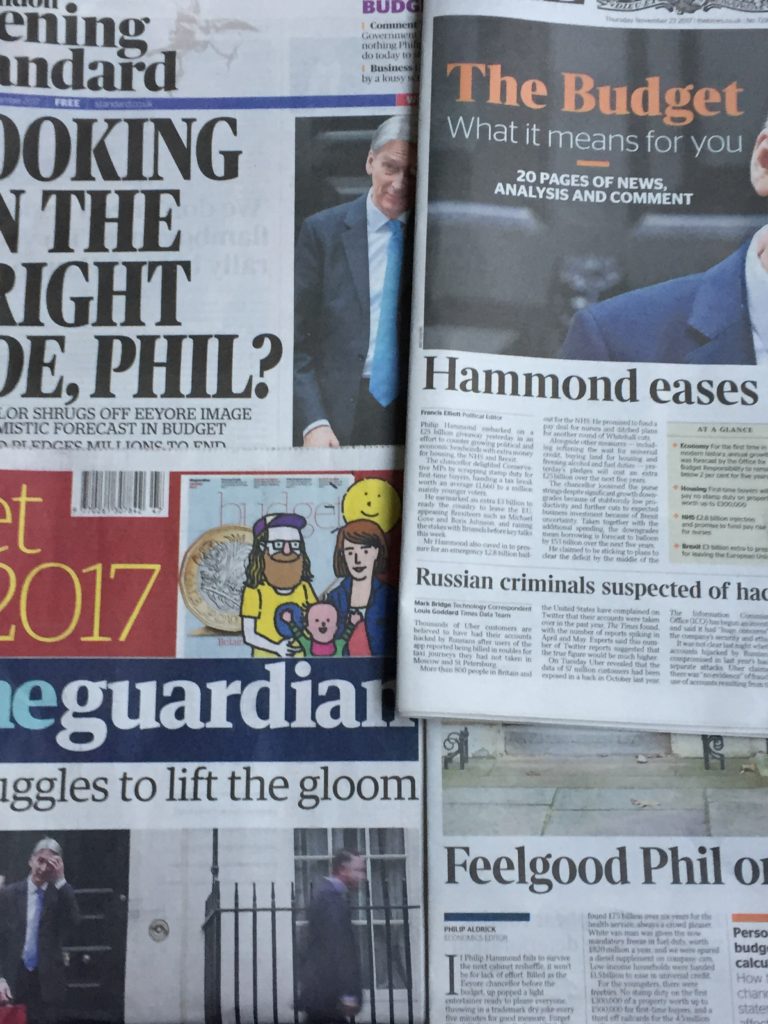 The pressure certainly seems to have been getting to ‘Spreadsheet Phil’ lately. Last month he described the EU as “the enemy”. On the Andrew Marr show last Sunday, he said there were “no unemployed people” in the UK. Hmm, try telling that to the unemployed. It certainly doesn’t sound good when the man in charge of the country’s finances seems totally out of touch with economic reality. Hammond later explained what he meant to say was that technological innovations don’t necessarily lead to job losses, this with particular reference to driverless cars, but to say the least his language was clumsy, and when you are supposed to be the safest pair of hands in the cabinet…well, let’s just say one wouldn’t want him fielding in the slips for England in Brisbane over the next few days.

One of Hammond’s nicknames is Eeyore, the perma-gloomy donkey in the Winnie the Pooh stories. To borrow from P.G. Wodehosue, there’s seldom any danger of mistaking Phil for a ray of sunshine. And small wonder. No sooner had he done his bit for first-time buyers than the OBR rained all over that parade as well, saying the major beneficiaries would be people who are already homeowners. Although that didn’t stop Rob Halfon, a Tory MP who is often critical of the government, from declaring: “He’s gone from Eeyore to Tigger.”

Enough of A.A. Milne, I think. The Labour leader, Jeremy Corbyn, was, unsurprisingly, less than impressed. “They call this budget ‘fit for the future’. The reality is this is a government no longer fit for office.” Actually, I am only surprised that his choice of words suggested he felt that at some point in the past they might have been.

59 thoughts on “FINANCE: Pretty shitty in the City”