FINANCE: Sterling and the current-see speculation

I went to the bank recently to order some euros for a holiday on the continent. I said I’d like 300. The woman behind the counter asked if I meant €300 or £300 worth of them. Before I could reply, she added: “Mind you, there’s not much difference these days.” Which there isn’t. The last time the pound was this weak against its counterpart was in October 2009, when the UK economy had only just started to recover from one of its deepest recessions in history.

They say it’s an ill wind that blows nobody any good and thus the situation is obviously great news for foreign holidaymakers to the UK. Apparently 3.5 million of them visited Britain in June, an all-time record for the month and 7% higher than in 2016. I guess that’s what a sterling 16% fall against the euro and a 13% drop against the dollar will do. The Office for National Statistics said that ‘staycations’ were consequently becoming more popular for we Brits; and then it produced stats showing that we were taking more overseas holidays than before the EU referendum. Make of that what you will, although I’d understand if it included something about lies, damned lies and statistics.

Perhaps more troubling was a story in The Times a couple of weeks ago which noted: “Hopes that the cheap pound will spur a long-awaited rebalancing of Britain’s economy towards exports and manufacturing have suffered a disappointing setback…official figures showed that the trade position has continued to deteriorate.” One expert said the scenario “isn’t really the springboard I would want”. Unless, I suppose, an empty pool is the kind of target you relish. 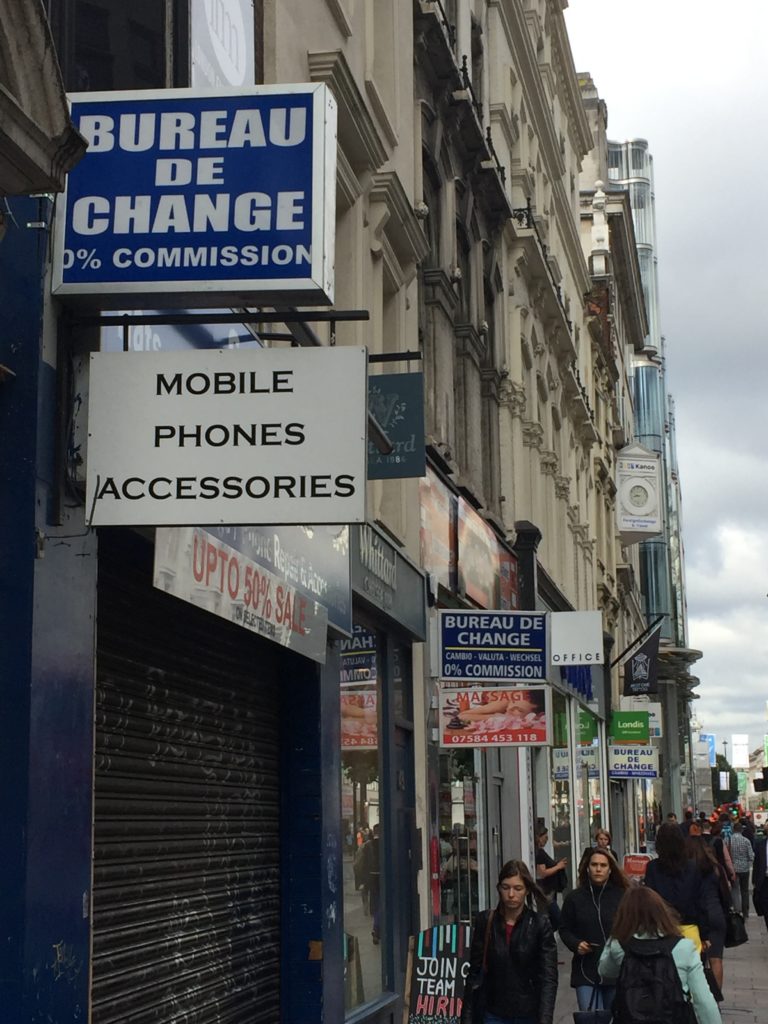 Bureaux de Change in Oxford Street, London: 0% commission but the pound is an expensive conversion

Of course, this can work the other way around. In early 2016, the England cricket team was playing in South Africa, where the currency is the rand. That had taken a pounding following continual allegations of political corruption and economic incompetence. Whereas routinely a pound might have bought you somewhere between 10 and 12 rand, it was trading at around 23. As one might imagine, the Barmy Army enjoyed the effect this had on the price of beer in SA. They had two favourite chants, one of “22 rand to the pound, you get 22 rand to the pound”, repeated a few times until it returned as “23 rand to the pound, you get 23 rand to the pound”. And so on. Their other one was “It’s so cheap it’s unbelievable”, repeated incessantly – which perhaps didn’t go down too well with the natives. Anyhow, they’re not chanting anymore.

And it’s not just the cricket. Shock horror, there is even a knock-on effect for football! Non-British players contemplating moving to a Premier League club are now frequently wanting their salaries to be delivered in euros rather than pounds. This may be no wonder: between the end of last season and the beginning of this one, sterling is 6% lower against the euro. Well, if this can have an impact on Tottenham Hotspur haggling over the price of acquiring Davinson Sanchez from Dutch team Ajax the whole thing has clearly gone too far…or at least to the extent that football’s transfer window will be the subject of my next blog. In the meantime, we can only wait and see if the pound and the euro soon find parity.

49 thoughts on “FINANCE: Sterling and the current-see speculation”