FINANCE: The Apple Story – and the Store

Mega companies avoiding tax is a subject that isn’t going to go away. Nor should it – that is, as a talking point. In an ideal world the actual practice would either stop or something serious would be done about it, but we haven’t had an ideal world since Adam met Eve. Which inevitably leads us on to the apple.

More precisely, on to Apple. The last time I blogged about this topic, in February, the company under scrutiny – although perhaps not nearly so much scrutiny as it should have been under – was Google in light of the ‘arrangement’ it seemed to have agreed with the Chancellor of the Exchequer, George Osborne (I wonder whatever happened to him?), regarding how little tax it could get away with paying – not that Google or the government put it like that. Latterly, the focus has been on a different Silicon Valley company, the world’s richest. Specifically, on the fact that last month Apple was ordered by the European Commission to repay a record-breaking £11 billion in back tax to the Irish government on the basis that a ‘sweetheart’ deal concluded between the Irish tax authorities and the American company amounted to illegal state aid. The essence of this was that Apple had secured a tax arrangement that was not and would not have been available to another company, in defiance of EU regulations. Margrethe Vestager, the competition commissioner, said that Apple had been allowed to attribute sales to an Irish ‘head office’ that actually only existed on paper.

There followed the predictable bluster from Apple about how it had always paid all its due taxes…’been a good global corporate citizen…responsible business model…kind to small animals’ etc etc ad nauseam. Tim Cook, chief executive of Apple, said: “We now find ourselves in the unusual position of being ordered to retroactively pay additional taxes to a government that says we don’t owe them any more than we’ve already paid.”

Yes, that’s right. The Irish government’s response, at least initially, was to say that it didn’t want the money. I guess that’s a tough question: is £11 billion worth the risk of Apple upping sticks and leaving its Cork operation, where it employs around 6,000 people? The whole issue continues to rumble on. Meanwhile, over here (i.e. in the UK) Apple has just announced that it is to create a new London headquarters in what used to be Battersea Power Station, a £9 billion redevelopment which is scheduled to open in 2021 and will be the workplace for 1400 employees. I suspect the possibility of a post-Brexit tax sweetheart deal with HM Revenue & Customs cannot be ruled out at this stage. 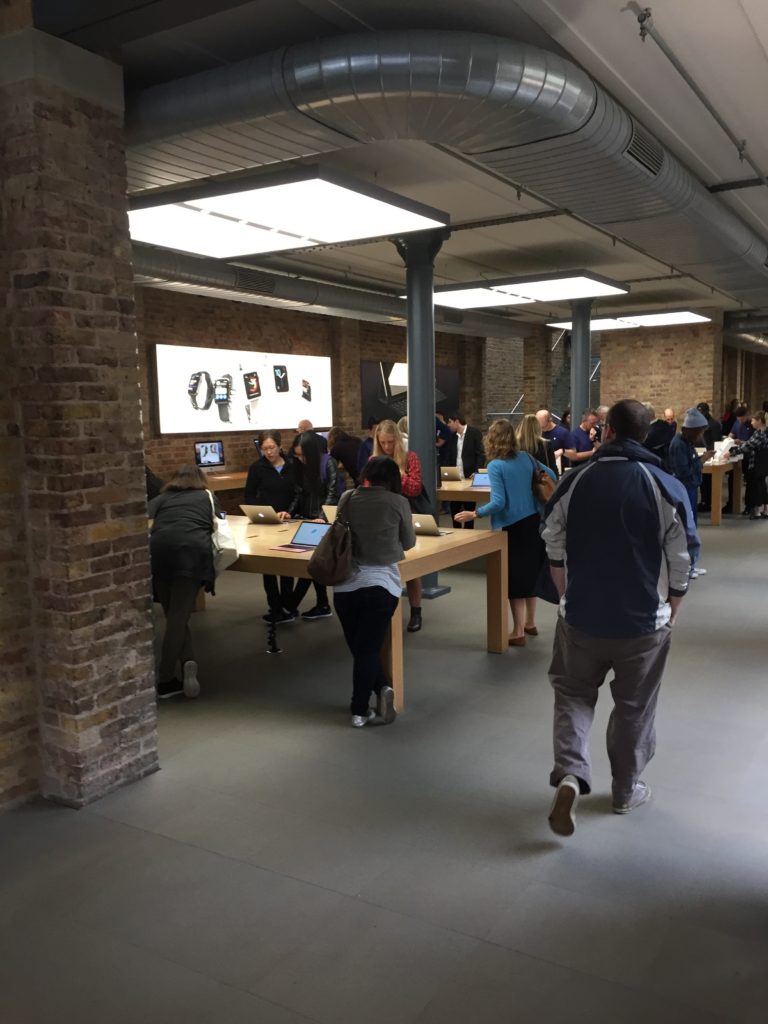 Apple Store in London’s Covent Garden, an area that’s changed a fair bit since the era of My Fair Lady

As for life in Apple’s shops, the iPhone 7 has just arrived, a product arguably most notable for its absence of a headphone socket. In the opinion of many, this is an innovation too far; taking something that worked fine and choosing to make it worse. And the battery life apparently hasn’t got any better; if anything maybe worse. As the guy in The Guardian wrote: “The fit and finish, the camera, snappy performance and waterproofing are great, but what does that matter if the battery is dead?”

Indeed. But for the parent company, there is certainly life after battery death – just please no jokes about the only certainties in life being death and taxes…

79 thoughts on “FINANCE: The Apple Story – and the Store”