FINANCE: The best of frenemies?

It was reported earlier this week, notably via a front-page story in The Times, that things are warming up when it comes down to sorting out Britain’s relationship with the European Union in the hugely important sphere of financial services once we have finally/formally/maybe (take your pick) left the EU in March next year. Under the headline ‘UK warns Brussels of tit-for-tat over Brexit’, the newspaper reported that British negotiators had explained to their continental counterparts that unless the regulations going ahead were drafted to allow UK insurance and other financial services companies to sell to European clients, that would be bad news for the EU as well as for the UK.

“This was not intended as a threat,” said someone from the British side, anonymously. “We wanted to set out what both sides could lose if we don’t get a good deal and it was received in that spirit.” For example, Britain is the largest market for investment services in Europe, and to lose access to UK clients would substantially hurt EU fund management companies. To put it another way, perhaps, if this all goes wrong then the lights (which are manifestly on in the photo on the home page) might go out in many major financial centres throughout Europe. 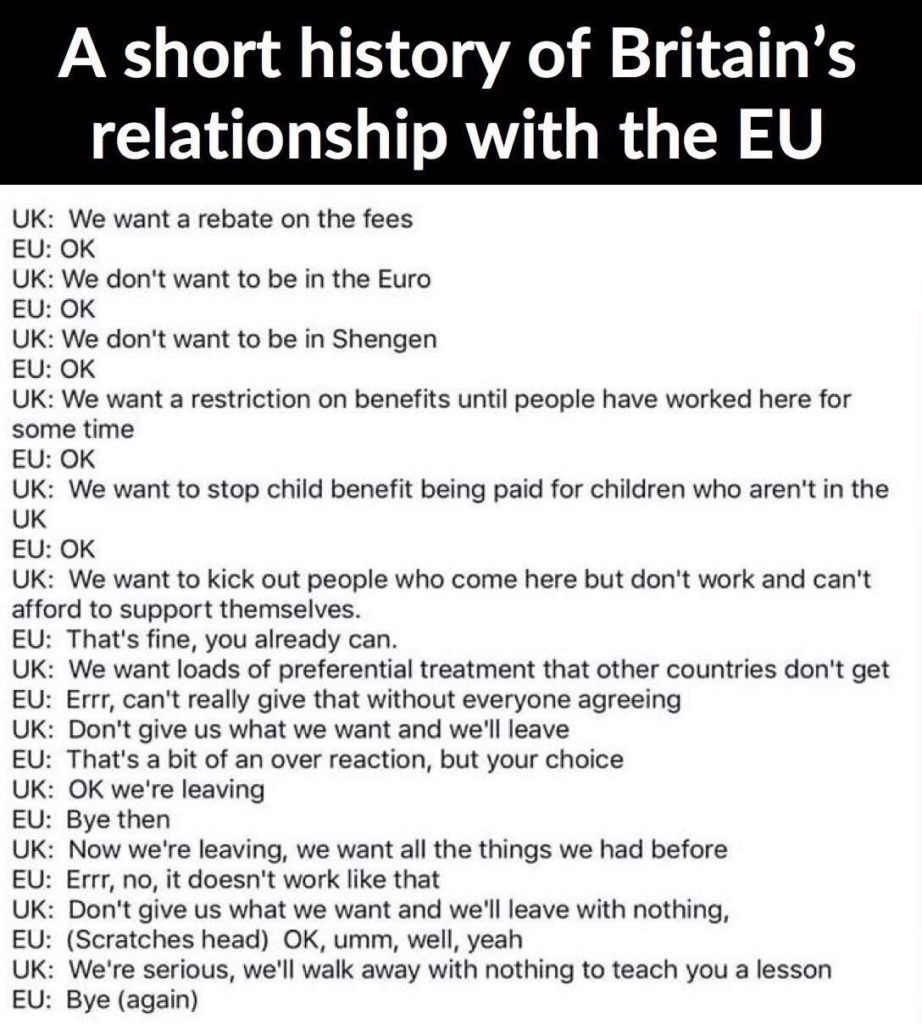 This spoof (hey, maybe it’s for real!) has been hanging around a while but it seems worth another run out

After almost 18 months of huffing and puffing, it still seems that we are no nearer establishing where we might be when we do finally leave the EU. (That is, if we do, and presuming there won’t be another referendum.) As I write, the Prime Minister is preparing to meet with President Macron at Fort Brégançon, his official holiday retreat in the South of France. Apart from her apparent hope, which right now seems almost as unlikely as porcine aviation, that her new chum Emmanuel will help her get round the traps being set by those bothersome bureaucrats in Brussels, this marks the end of Theresa May’s walking holiday in Italy, which itself was a risky enterprise given that the last time she went on a long walk (to Wales, in 2017) she came back sufficiently refreshed to call a General Election which she had previously ruled as being out of the question and which she went on to regret calling given that the public didn’t supply the answer she was seeking. Pesky things, the electorate.

Finally, although this has precious little to do with finance, I refer to another front-page story from The Times this week: ‘Moderate drinkers less likely to get dementia than teetotallers’. It said “those drinking up to four and a half bottles of wine a week – three times the guidelines – were at lower risk of developing [dementia] than those who abstained”. These findings were based on a study of 9,000 civil servants who completed questionnaires about their alcohol consumption. But everyone knows that everyone lies on those forms! They were probably drinking twice that much!! If they had been working for the Brexit department, make that five times more!!!!!

58 thoughts on “FINANCE: The best of frenemies?”